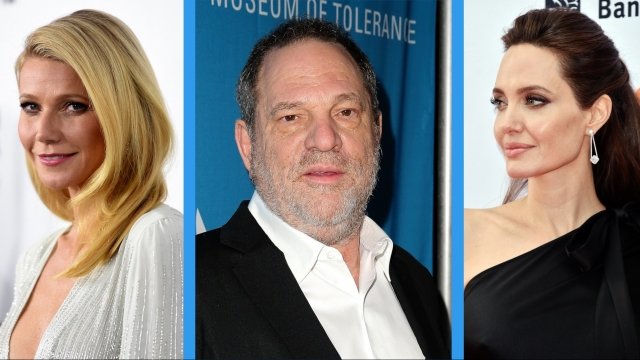 These women include Gwyneth Paltrow and Angelina Jolie.

As of Tuesday, in the wake of an explosive New York Times report, 23 women have accused Harvey Weinstein of sexual harassment or assault.

Paltrow told The New York Times that Weinstein sexually harassed her before shooting began on the film "Emma." She was 22 at the time.

The actress told the paper: "I was a kid, I was signed up, I was petrified."

Jolie said Weinstein harassed her in a hotel room, and that she, "as a result, chose never to work with him again and warn others when they did."

The Weinstein Co. Is Trying To Distance Itself From Harvey

The production and distribution company is reportedly working to change its name after its board fired co-founder Harvey Weinstein.

Some of the stories that followed the original Times report go beyond sexual harassment. On Tuesday, The New Yorker published the accounts of seven more women, several of whom accused Weinstein of rape and sexual assault.

News of Weinstein's years of alleged sexual misconduct follows the highly publicized accusations leveled at Bill Cosby, the late Roger Ailes and Bill O'Reilly. For some, these floods of accusations raise the question: Why do women wait to come forward?

According to the Maryland Coalition Against Sexual Assault, survivors often fear they won't be believed or supported by the justice system. The Rape, Abuse and Incest National Network reports that "out of every 1,000 rapes, 994 perpetrators will walk free."

Actress Heather Graham, who also accused Weinstein of sexual harassment, wrote in Variety: "While I still do feel guilty for not speaking up all those years ago, I’m glad for this moment of reckoning. To the countless other women who have experienced the gray areas: I believe you."