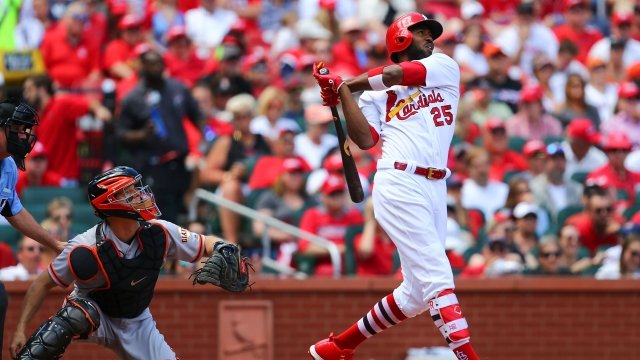 Major League Baseball players are hitting more home runs than ever, and no one is sure why.

2017 saw more homers than any other MLB season in history — home runs are up by nearly 25 percent compared to just two years ago.

For a sport that's often resistant to change, this is a big deal — especially since no one quite knows how to make sense of it.

Not All MLB Stadiums Are Equally Safe; An Incident Wednesday Proved It

During a game between the New York Yankees and Minnesota Twins, a line drive from a Yankees player hit a child in the stands.

One explanation sounds pretty simple: Hitters are trying harder to hit fly balls than they used to.

There are a few incentives for this, including an increase in defensive shifts. That's when the fielding team moves a bunch of infielders to one side of the field to keep a pull hitter from getting line-drive hits.

It stands to reason power hitters would try to counteract that by hitting over the shift. Plus, strikeouts have hit record-breaking highs for a decade now, implying hitters are hitting big and missing big.

But there's another reason people are throwing around.

Tied Baseball Games Are More Common Than You Might Think

Ties are extinct in the U.S. — but that's just one baseball-playing country.

Former MLB slugger Teixeira isn't alone. Several high-profile players say they feel something different with the baseball this year, and there's research to back it up.

An analysis by The Ringer suggested baseballs have flatter seams than they did a couple of years ago. That can cut down on air resistance and make the ball travel farther. Another study from FiveThirtyEight backed up this air resistance claim.

For his part, MLB Commissioner Rob Manfred says the league is not tampering with the ball and tests baseballs every year to make sure they're within standards. But in baseball, it's been the Year of the Dinger nonetheless.