Colin Kaepernick Files Grievance Against The NFL For Alleged Collusion 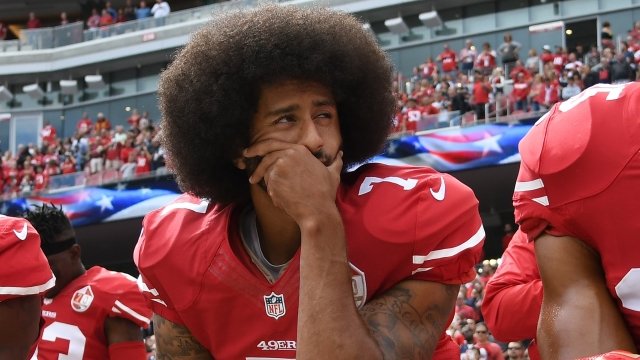 Former San Francisco 49ers quarterback Colin Kaepernick filed a grievance against the NFL. It accuses all 32 teams of colluding to keep him out of the league.

The grievance, filed on Sunday, claims NFL owners "colluded to deprive Mr. Kaepernick of employment rights in retaliation for [his] leadership and advocacy for equality and social justice."

That "leadership" started when Kaepernick kneeled during the national anthem in 2016.

"This country stands for freedom, liberty, justice for all, and it's not happening for all right now," Kaepernick told reporters.

A spokesperson for the league said there's no mandate in the works and that the NFL is trying to move "from protest to progress."

Some other NFL players followed suit that year. But it wasn't until the 2017 season and a critical tweet from President Donald Trump that a big wave of players joined in.

Kaepernick opted out of his contract with the 49ers in March and has yet to sign with another team.

Under the terms of the collective bargaining agreement between the NFL and the players' union, an independent arbitrator should hear his collusion claims.

But one expert told The Washington Post that Kaepernick's accusation can be hard to prove because "there has to be some evidence of an explicit or implied agreement."

As of Monday morning, the NFL hadn't said anything about the grievance.