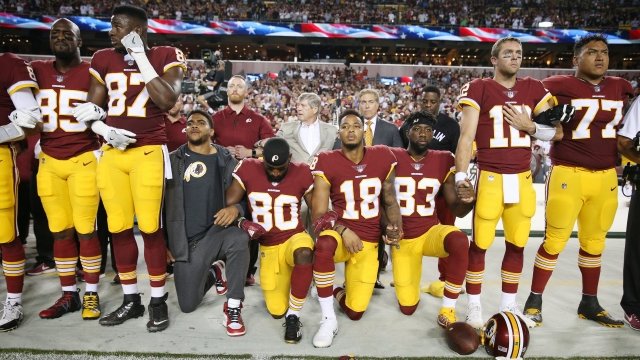 A spokesperson for the league said there's no mandate in the works and that the NFL is trying to move "from protest to progress."

The NFL says it isn't planning to make players stand for the national anthem.

A spokesperson told NFL.com the league isn't seeking any sort of mandate for players and that it's working to bring people together.

The announcement comes after NFL commissioner Roger Goodell sent a memo to NFL teams Tuesday saying, "we believe that everyone should stand for the National Anthem."

The NFL has been at the center of some pretty heated national debates on the subject.

Those that oppose the protests view kneeling as unpatriotic and disrespectful to the flag. President Donald Trump has commented on the matter several times, even saying the NFL should fire players that take a knee.

But the players kneeling during the anthem and their supporters have repeatedly said they're protesting racial inequality and police brutality, not the flag.

The NFL spokesperson said the league is trying to "move from protest to progress." Players and owners are expected to meet next week in New York to discuss the path forward.