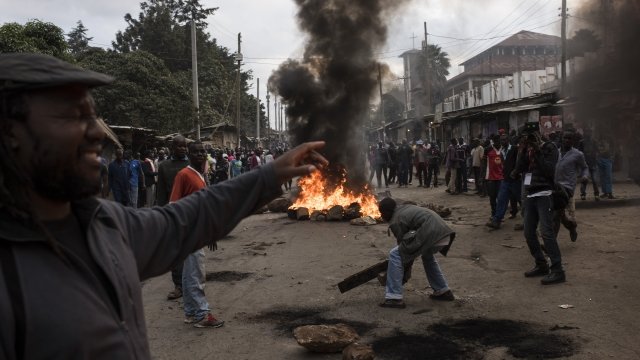 He says there are likely to be the same problems that caused the country's Supreme Court to annul the first election's results.

Violent protests will likely continue in Kenya after the chief opposition leader withdrew from a rerun of the presidential election.

In a news conference on Tuesday, Raila Odinga said his concerns about open and fair elections were likely to be even worse the second time around.

Odinga lost to incumbent President Uhuru Kenyatta in the original election on Aug. 8. But he claimed vote totals had been manipulated and told his supporters not to accept the election's result.

But the country's Supreme Court annulled those results, ruling the vote was "not conducted in accordance with the Constitution and the applicable law."

Kenya's constitution is only seven years old; the now-annulled presidential election was only the second under the guiding document. That lack of historical precedence has left Kenyan officials in unfamiliar territory.

And the political uncertainty has led to violence. Since the disputed election in August, protests and the resulting police response left more than 30 people dead.

Odinga is calling for continued protests until his party's demands are met. Those demands include firing officials on Kenya's election commission and auditing the election servers.

The commission has said Odinga's demands are unattainable within the current time frame. His stepping down, according to Odinga's team, should trigger an entirely new election process — giving the commission ample time to make the recommended changes.

Others have pointed to an existing rule that says if a candidate drops out of a two-person race, that candidate's challenger wins by default.

Following a court ruling, the election commission said it will allow all eight candidates that participated in the Aug. 8 vote to run again. Other than Kenyatta and Odinga, no candidate pulled more than 1 percent of the vote.

To muddy the waters even more, Kenyatta's ruling party advanced changes to election law Wednesday. The changes have been widely criticized as they would require proof voting irregularities influenced the election result and would automatically declare a candidate the winner in a repeat presidential election if the challenger withdraws from the race.

Plastic bags have become so pervasive in the environment that they're starting to make their way into the food chain.

The election commission said it could not compel a candidate to participate but noted Odinga was not officially out of the race until he filed the proper paperwork. The repeat election is scheduled for Oct. 26.