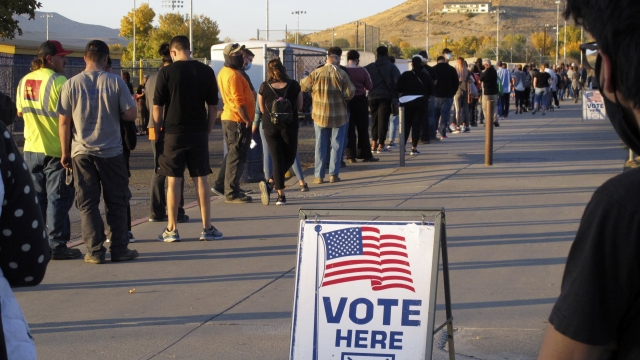 Early in-person voting starts Friday in four states and mail-in ballots have already started going out in others.

With just under two months to go, the race for control of Congress is shaping up to be one of the tightest in recent history.

And when it comes to which party controls the Senate, election experts say one contest stands out — Pennsylvania.

Organizations Race To Register Eligible Voters Ahead Of Midterms

National Voter Registration Day was first recognized in 2012, and has helped over 4.7 million people register to vote over the past decade.

"The No. 1 race at this point that is likely to switch parties is one that could go from Republican to Democrat, which sort of defies the expectations we had at the beginning of this cycle when it looked like it would be an incredibly favorable midterm cycle for Republicans and a backlash to President Biden and the Democrats," said Jessica Taylor, Senate and governors editor at The Cook Political Report.

Democrat John Fetterman is leading GOP Senate candidate Mehmet Oz in one of the closest watched races of the fall.

Current Republican Sen. Pat Toomey is retiring. If Democrats flip his seat, the GOP needs to gain two seats somewhere else to retake the majority.

Where could those seats be? Eyes are on Arizona, Nevada, New Hampshire and Georgia, where the races are close and Democrats are defending seats they currently hold.

It's the opposite in Ohio, Wisconsin and Florida, where Republicans are in tight races to hold on to those seats.

Adding to the unpredictability this cycle is the lack of experience among some first-time Republican candidates. Primary voters in five of those eight states put their support behind rookies without any political experience.

"There are voters that are just so frustrated at this point. And we see this in disapprovals, we see this in wrong track/right track numbers, that there are voters — and I've heard this in focus groups I've watched this year, too — they're like, you know, just blow the whole system up," Taylor continued.

Political outsiders can be successful — look at former President Donald Trump, who continues to be a big influence in the Republican Party.

"Midterm elections are a referendum on the current president," Taylor said. "However, we have never seen a former president be this involved and insert himself so much in a way that Democrats could make this a referendum on Trump."

Trump's endorsement has helped first-time candidates win their primaries. But it could be a hindrance in the general election when they're up against Democrats.