Another Celebrity Named Rock Might Be Eyeing Political Office 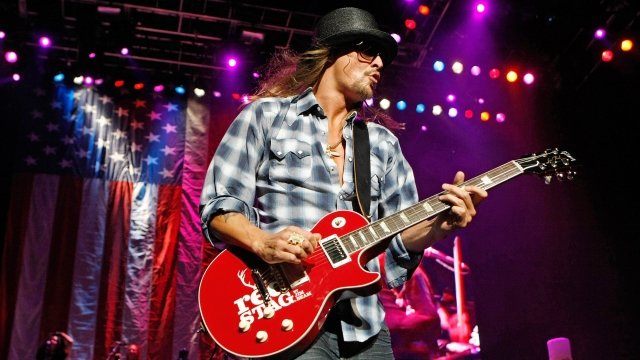 "In Rock we trust?" But we're not talking about Dwayne "The Rock" Johnson here.

How about musician Kid Rock? The "All Summer Long" singer launched a website called Kid Rock for U.S. Senate. He later confirmed on Twitter the website is real.

The site does not list any policy ideas, but it does host a list of possible campaign slogans like "I'll Rock the Party," "You've Never Met a Politician Quite Like Me" and "Party to the People." The phrases all seem to play off some of his previous song titles.

The singer has yet to make an official announcement stating he plans to run for Senate — though he did say a "major announcement" is imminent.

A spokeswoman for the Federal Election Commission told CNN that, as of Wednesday, he had not filed the necessary paperwork to run for office.

If the Michigan native does run in 2018, he would go up against Democratic Sen. Debbie Stabenow.

In a statement to MLive, Stabenow said, "I know we both share a love of music. I concede he is better at playing the guitar, and I'll keep doing what I do best, which is fighting for Michigan."

Mark Zuckerberg Does Not Want To Be Your Next Politician

He is busy touring the country, though.

Other celebrities running for office soon include actor Antonio Sabato Jr., who's running for Congress in California, and former NFL player Rosey Grier, who plans to run for California governor.

And we can't forget The Rock. The "San Andreas" star keeps getting asked about a possible 2020 presidential run, and Johnson has yet to rule it out.

"I'm very flattered by it. Three and a half years is a long ways away, so we'll see," Johnson said on "The Tonight Show."