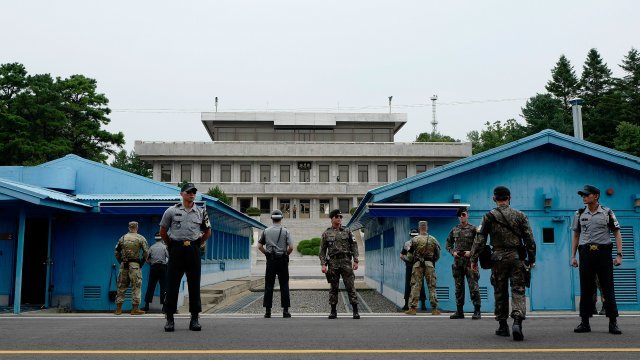 A 2.5-mile-wide strip of land is all that's keeping two heavily armed countries from facing off.

There's only one way to drive from North Korea to South Korea, or vice versa: by passing through the Korean Demilitarized Zone.

The 1953 armistice that put the Korean War on indefinite hold also drew the Military Demarcation Line, or MDL, which is the technical land border between North and South Korea. The DMZ is a 2.5-mile-wide buffer surrounding that line, which keeps the two country's troops at arms length.

Diplomacy happens at the Joint Security Area, aka "Truce Village." A row of blue buildings in the area straddle the MDL, providing a neutral space for meetings between the opposing forces.

Watch A North Korean Soldier's Risky Defection Across The DMZ

For the first time, the United Nations Command has released security footage of a North Korean's defection across the demilitarized zone.

But just outside the DMZ, both countries have built up a heavy military presence. The Congressional Research Service estimates that if a real war actually kicked off, North Korea's border artillery alone could leave anywhere from 30,000 to 300,000 people dead in a matter of days.

The physical separation hasn't stopped the two sides from blaring propaganda at each other over massive loudspeakers. And activists occasionally send balloons with anti-North Korean messages to float across the DMZ.

Soldiers do occasionally patrol the DMZ while acting as "military police." But while chasing down a defector in November, North Korean forces stepped over the MDL and fired shots across it, which technically broke the decades-old armistice agreement keeping the two sides from all-out war.