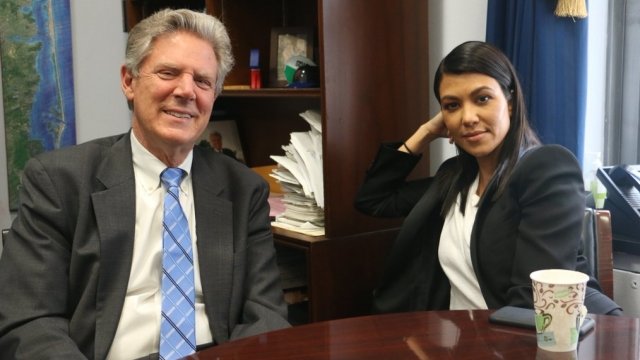 Kardashian said it's hard to find nontoxic and safe personal care products and added: "Everybody should have the right to healthy products. I do feel like it's time for Congress to do its job."

U.S. Rep. Frank Pallone, who partnered with the socialite on Tuesday, has long pushed for more regulations on the cosmetics industry. He argues the Food and Drug Administration's laws for the products haven't been updated in nearly decades. This past year, the politician called on the FDA to investigate reports of possible carcinogens or asbestos in sunscreen, perfume or even makeup sold to children.

Claire's Is Testing Some Of Its Makeup Products For Asbestos

The products in question have been pulled from shelves, and the company is offering full refunds to concerned customers.

Kourtney Kardashian is a notable advocate for organic and "clean" makeup, so it makes sense why she would appear in support of industry regulations. But the celebrity also has other connections to the makeup world — her sister Kim Kardashian and half-sister Kylie Jenner both have their own makeup brands.

Coincidence? Leaders from the Environmental Working Group say it is, but the Kardashian-Jenner clan does have a reputation for coordinated publicity efforts.

Kylie Jenner's Makeup Brand Could Be Worth $1B By 2022

And Kylie's not alone — independent makeup brands are overtaking the industry.

Kardashian has in the past claimed that her family's beauty products are made of nontoxic ingredients. But at the cosmetics safety briefing, the reality TV star said she didn't know the exact ingredients used in the makeup she helped develop.