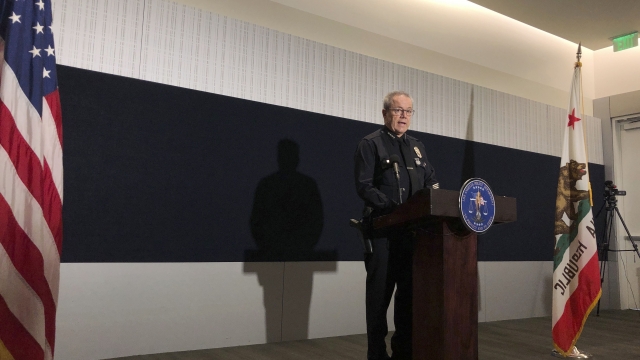 Takar Smith, Keenan Anderson and Oscar Sanchez died after interactions with the LAPD. Smith and Sanchez were shot by officers.

The head of the Los Angeles Police Department took the rare step of publicly questioning the actions of his officers before an investigation was done — after three men died during or after police encounters last week.

"This cluster of events, while miles apart, deeply concern me. I know it did to the families that were involved, as well as other members of our community," said Michel Moore, the chief of the Los Angeles Police Department.

Takar Smith, Keenan Anderson and Oscar Sanchez died after interactions with the LAPD. Smith and Sanchez were shot by officers. Anderson died after his heart stopped at a hospital hours after police used a stun gun on him.

Each of them suffered apparent mental episodes or were under the effects of drugs. Their deaths are already prompting repeat training in the LAPD.

"These cases are a stark reminder that mental health continues to be an ongoing struggle for many people in our community throughout the city of Los Angeles," Moore said.

Takar Smith died Jan. 2 after his wife called police to tell them he was at her apartment in violation of a restraining order.

She said he was not taking his medication for schizophrenia and might get violent. Over the course of a 15-minute interaction police never called or discussed calling the department’s specialized mental health unit — despite knowing his history.

"Without exception, our mental evaluation unit, which we’ve invested in substantially, to be a call center 24 hours a day. Expectations is this type of pattern of information would result in a consult and information that may have helped and support the officer’s difficult task before them," Moore said.

After pressure from the families and outside groups, the police chief said he decided to release the videos well ahead of the department’s own 45-day deadline after an incident. He also says the department’s training coordinators saw clips of the encounter with Takar Smith with intent to take lessons to officers in fresh training on dealing with people experiencing mental health challenges.

Correction: A previous headline for this story said three men had died after officer-involved shootings. This headline has been updated.

Officers Get New Partners In Effort To Decriminalize Mental Illness

In Virginia police officers are now working with mental health clinicians to reduce deadly encounters between police and the mentally ill.