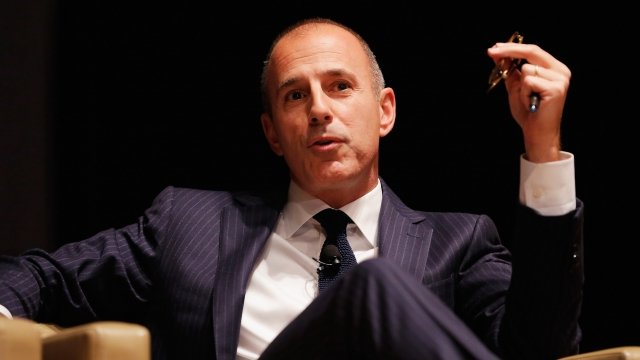 The chairman of NBC News said an employee lodged a complaint against Lauer for "inappropriate sexual behavior in the workplace."

"We just learned this moments ago — just this morning. As I'm sure you can imagine, we are devastated and we are still processing all of this," Guthrie said.

Lauer had worked as an anchor on the morning show for more than 20 years.

NBC News Chairman Andy Lack sent a memo to staff saying an employee had filed a complaint against Lauer on Monday. Lack noted it was the first complaint lodged against Lauer since he's worked at the network, but that there was "reason to believe this may not have been an isolated incident."

A lawyer representing the employee who filed the complaint told The New York Times, "Our impression at this point is that NBC acted quickly, as all companies should, when confronted with credible allegations of sexual misconduct in the workplace."

The Pixar co-founder has apologized for "missteps" after sexual misconduct allegations came to light.

The news comes about a week after CBS News fired its morning show co-host Charlie Rose over allegations of sexual misconduct.

As of Wednesday morning, NBC News has yet to announce who will replace Lauer as co-host of "Today." Last year, Lauer reportedly signed a $20-million-a-year contract to stay with the morning show through 2018.

Lauer has yet to release a statement more than four hours after his dismissal was announced.