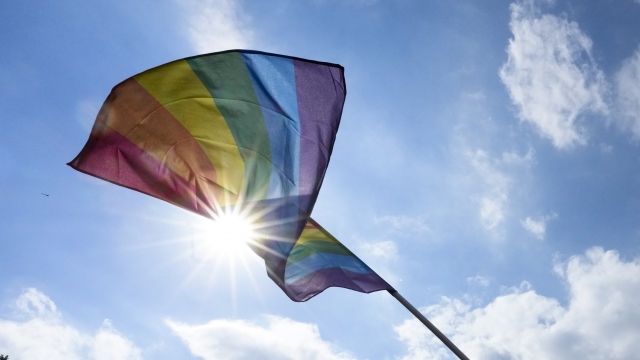 Dee Farmer served time at a federal penitentiary in Terre Haute, Indiana, for credit card fraud. She was housed in a male facility even though she identified as a trans woman. Based on prison policy, she was placed with her gender assigned at birth. Within two weeks of her arrival, she says she was beaten and raped by her cellmate.

"I stayed in prison for 17 years. And while there, you know, I suffered all the types of abuses," she said. "When I was raped, the guard was sitting down in his office and there were maybe 200 inmates in the unit I was in, in Terre Haute. There's only one guard, generally, to every housing unit. So, to believe that the officers can protect you is just a myth."

A lawsuit by Farmer against the prison system reached the Supreme Court.

The justices ruled in her favor, saying that prison officials may be liable for harm if they know of safety risks and disregard them. That case was in 1994.

Where Are Anti-Trans Bills On The Rise?

As of mid-April, at least 325 anti-LGBTQ+ bills were pending in more than two dozen states.

Jane Hereth is an assistant professor of the University of Wisconsin-Milwaukee whose recent report documented the overrepresentation of LGBTQ+ people in the criminal justice system and the pipeline that funnels many of them there.

"Bias and discrimination across the board by police, by judges, by attorneys," she said. "Things like family rejection, poverty, homelessness, bullying in schools — were all part of their story leading to the criminal legal system."

According to the National Survey on Drug Use and Health, LGBTQ+ individuals were twice as likely to be arrested compared to their straight counterparts.

"When we talk about incarceration, probation, the justice system in general, there's a high representation of LGBTQ Black and brown folks," Black and Pink Social Worker and Deputy Director Andrew Aleman said.

Once behind bars, trans individuals are at a heightened risk, especially trans women of color.

"We know that most trans women who are who are taken into custody are housed in a men's facility, despite knowing the risk and the high rates of sexual assault and violence that happen to trans women in men facilities," Lambda Legal Senior Attorney Richard Saenz said.

Shows like "Orange Is the New Black" introduced many in the public to life in prison for LGBTQ+ people.

Curbing People With Mental Health Away From Jail

"'Orange Is the New Black' and some other shows that have come out since then have really humanized people who are in custody," Saenz continued. "One of the things that I remember seeing is that a trans woman was approached, you know, maybe by four or five inmates at once, sort of like jokingly harassing her sexually. And so that is something that you generally see within the prison system on a daily basis."

"They suffer a number of times, many of them, even if they're not raped, they are constantly sexually harassed and pressured into sexual relationships," Farmer said. "And many of them have to do it for their safety."

Farmer says there's still a revolving door of LGBTQ+ people who go through solitary confinement for  protection but then return to the general prison population because confinement was depressing.

Organizations like Black and Pink are advocates for LGBTQ+ in the criminal justice systems. Their programs connect gay inmates to support networks outside prison.

"My ask would be that we don't forget our roots, and we don't forget that there are thousands of LGBTQ people in prisons and jails right now. And these are our loved ones," Saenz said.