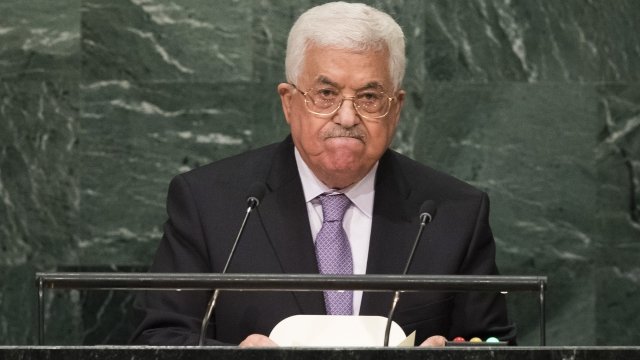 Palestinian leader Mahmoud Abbas called for a new moderator in peace talks between Palestinians and Israel.

In a fiery speech, Palestinian Authority President Mahmoud Abbas blamed Israel and the U.S. for ending peaceful talks toward a two-state solution.

Abbas accused President Donald Trump of giving Palestinians "the slap of the century" and said the U.S. was no longer an acceptable mediator in peace talks. He also said, "Israel has killed Oslo," referencing the Oslo Accords made between Palestinian and Israeli leaders after the first Palestinian intifada, or uprising.

President Donald Trump has called peace between Israelis and Palestinians "the ultimate deal."

But the talks were supposed to end with a State of Palestine by the late '90s. That obviously didn't happen.

Disagreements caused the talks to fall apart, and the temporary governance of the Palestinian Authority and reluctant cooperation with Israel became the norm.

And not all Palestinians were party to the "Declaration of Principles" that came from Oslo, which included opposition to terrorism, acceptance of Israel's sovereignty and willingness to coexist with the Jewish state.

Abbas built his career on realizing a two-state solution with Israel, so it's unclear if he would go so far as to reject the status quo and renounce the Oslo peace process completely. Doing so would effectively make his political post irrelevant. He called for a return to negotiations with a new country acting as moderator.