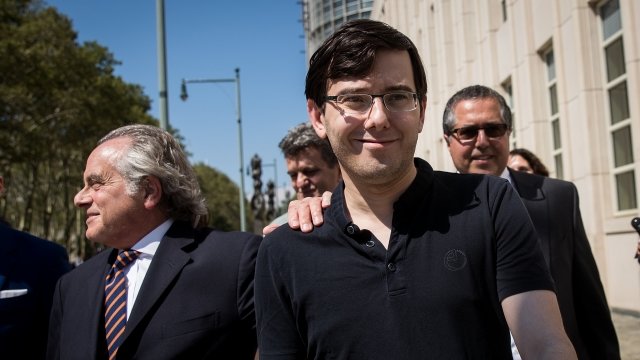 Federal prosecutors have asked that Martin Shkreli's bail be revoked over some of his social media comments, including one about Hillary Clinton.

Martin Shkreli has apologized for threatening comments he made about Hillary Clinton — right before a hearing to decide if he keeps his freedom.

Last week, Shkreli told his Facebook followers to "grab a hair" from Clinton's head during her book tour. He said he'd pay $5,000 per hair.

That prompted federal prosecutors to ask the judge overseeing Shkreli's fraud case to revoke his bail. They argue that post, along with others, shows he is a danger to the community.

Shkreli is out on bail for that fraud case. A jury found the former hedge fund manager guilty on two counts of securities fraud and one count of conspiracy to commit securities fraud.

Shkreli allegedly wrote in a letter to his employee's wife, "I hope to see you and your four children homeless."

The prosecutors point out Shkreli was suspended from Twitter after harassing journalist Lauren Duca, and that he also made a public threat against political pundit Ana Kasparian.

In his apology, Shkreli said he "used poor judgment" and didn't intend to encourage violence. He's requested that the judge not change his bail status. A bail hearing is scheduled for Thursday.