Has The Coronavirus Pandemic Impacted Gun Violence In America? 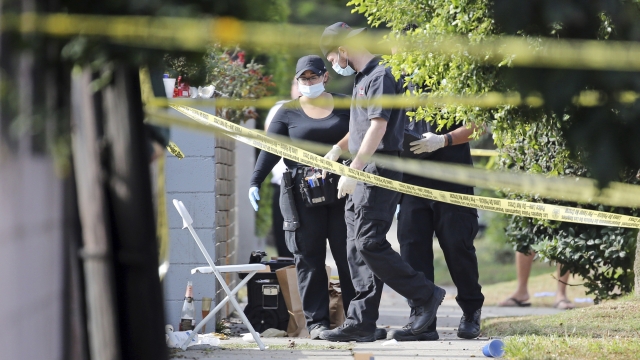 The coronavirus pandemic has impacted every facet of life in America, and that includes gun violence and mass shootings.

There is no single definition of a mass shooting. The Gun Violence Archive, a reputable source of statistics, defines it as an incident with four or more people killed or injured, excluding the shooter.

Their data shows the number of mass shootings in April decreased by 21% from the year before. The number of people killed or injured in those shootings decreased by 25%. But with most of America under some kind of stay-at-home order in April, experts say that drop is to be expected.

"This is a real outlier time, where I think it's very hard to read too much into the fact on what's happening to mass shootings since the locations where mass shootings typically occur are all shut down," said David Chipman, a senior policy adviser at Giffords and a former ATF special agent.

But mass shootings are a small subset of America's gun violence crisis. Some cities have seen gun violence increase, including Dallas and Tucson, according to The Trace.

"Mass shootings, those that are breaking news, cannot be the measure of how we're doing as a nation approaching gun violence. Because they, although they're spectacular, they are newsworthy, and they are catastrophic, they really don't typify the real issues of gun violence in our country," said Chipman "We shouldn't accept it as normal."

"As some places stay on these lockdown orders, you know, again, that mass shooting may not happen down the street outside, but there could be ... an atrocity inside the home," said Dakota Jablon, director of federal affairs at the Coalition to Stop Gun Violence.

The Giffords Law Center says, on average, about 100 Americans are killed by guns every day. About two-thirds of those deaths are suicides.

Poll: 1 in 20 Households Bought A Gun In Response To COVID-19

A Newsy/Ipsos survey reveals how some Americans reacted to COVID-19 and the uncertainty brought on by the pandemic.

During the pandemic, gun purchases in America have gone up, and many of the buyers were first-time gun owners. Across the country, people have said the fear of the unknown pushed them to buy a firearm.

"What my fear is, is that many people made a choice to bring a gun in their home, thinking that they were doing the right thing for themselves and their family. And because they haven't trained and the fact that they're under other stress, they bought an item in their home that's much more likely to hurt themselves or a family member or result in the tragedy they hope to, you know, avoid in the first place," said Chipman.