McConnell Delays Vote On Health Care Bill Until After July 4 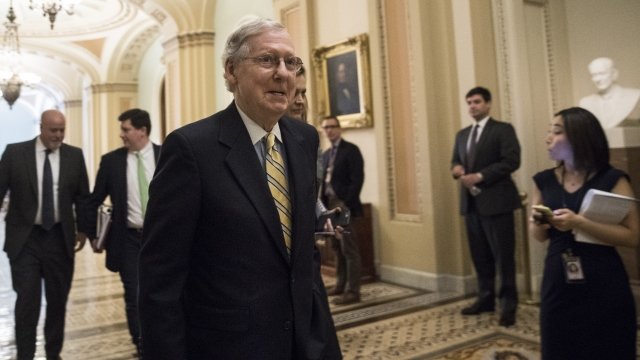 Senate Majority Leader Mitch McConnell didn't get enough support to have the bill considered on the Senate floor.

The Senate was expected to vote on the bill later this week.

"We're going to continue the discussions within our conference on the differences that we have that we're continuing to try to litigate," McConnell told reporters Tuesday afternoon.

The decision to delay came after several Republican senators said they wouldn't back a procedural vote to bring the bill to the floor for consideration.

Some cited concerns with the bill, while others said they felt like the vote was being rushed.

The nonpartisan agency says the Republican plan will leave 22 million people uninsured over the next decade.

The Congressional Budget Office released its report on the bill Monday.

McConnell has a narrow majority of 52 seats in the Senate. He can afford to lose only two GOP votes and still put the bill up for consideration, not to mention pass it. And that's banking on a tie-breaker from Vice President Mike Pence.

McConnell wanted the vote to happen before the Senate's July 4 recess.

He'll have just a couple weeks to rally support. The Senate is on recess for the entirety of August, and its members only have until the end of September to pass a bill with a simple majority. In that time, they also need to reconcile it with the House's bill.

"The president has been very involved over the last week talking to members individually," McConnell said before the meeting. "He wanted to talk to all of us together today, and I think that's helpful."