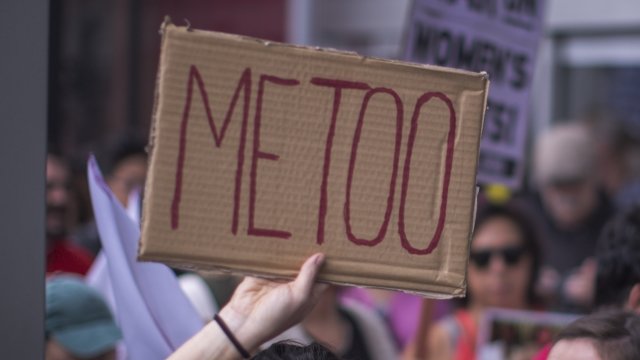 University of Missouri theater students organized a "Me Too Monologues" event for survivors of sexual abuse, misconduct and harassment.

It can be daunting to come out with a story about sexual harassment or misconduct. To do that in front of an audience can be even more intimidating. But it can also be empowering.

Sarah Senff is a PhD candidate at the University of Missouri's Department of Theatre. Her dissertation focuses on using autobiographical solo performance as a way to heal.

"I find it really empowering to be able to stand in a space and sort of implicitly say that I am deserving of the audience's time and attention and that my life and my story matter," Senff said.

Earlier this month, the university's theater honor society put on its inaugural Me Too Monologues event. It focused on giving survivors of sexual violence, intimate partner violence and gender-based discrimination a platform to share their experiences. Theater student Leah Huskey organized the event.

"I just really feel like it is time to tell these stories, but the people who should be telling it are the people who've experienced it and have survived it," Huskey said.

It's unclear if more people report after high-profile sexual assault cases, but some say they can open up the discussion.

Following the rise of the #MeToo movement, events like this have sprung up across the country — and not just on college campuses. During New York Fashion Week, some models used the catwalk to spotlight stories of sexual abuse.

But even before the #MeToo movement, mental health professionals have long used theater and performance to help people cope with trauma. The purpose isn't to dramatize the painful experience but to externalize it, "foster new behavior patterns and revive suppressed feelings."

"The way that counseling psychologists talk about trauma is that you can't tell a simple, clear narrative of trauma," Senff said. "It does things to the memory, so performing about traumatic events can help you clarify and heal with that history."

These Women Are Exposing The Scale Of Sexual Misconduct In Academia

Meet the women who started the Medill #MeToo movement and the former professor who created a viral public survey of harassment in higher ed.

Huskey hoped the event would give participants similar coping mechanisms — no matter their on-stage experience. As a result, many of the performers at the Me Too Monologues weren't actors or regular public speakers.

"That's kind of how the idea came about — to give survivors a place to tell their stories, not just on social media, but in front of an audience of real people who can be there and experience the kind of empathy that can only come from that kind of face-to-face interaction," Huskey said.

"Originally, I was — I definitely had a fear, I guess, of public speaking, and I think everyone gets nervous to a certain extent," performer and student Tyler Ingram said.

Those performers said they hoped to connect with audience members, help them understand the realities of sexual misconduct and harassment, and help them feel less alone if they themselves are coping with trauma.

"Because of me being kind of vulnerable and genuine with it — that made them comfortable enough to share their story, possibly even for the first time," Ingram said.

"It's an odd feeling to go through something and even though you know other people are out there with experiences like it or reading things in the news or online, it's super different to have somebody speaking it to you," performer and student Sarah Clute said.

"It just kind of like adds to your inventory of coping with it. So I hope that that was something gained from anybody listening to mine, at least, because I know I gained a lot of perspective, just from listening to everybody else's."