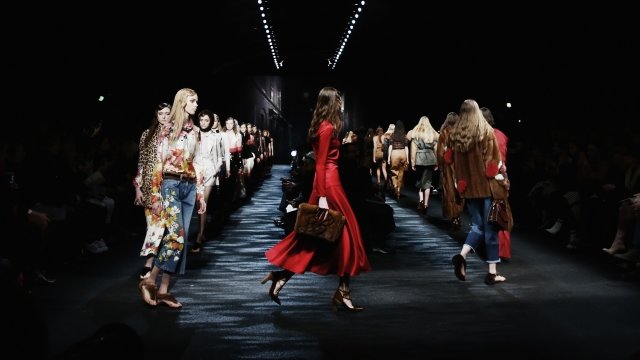 Models are coming forward with their stories of sexual abuse, and major fashion groups are working to create safe, respectful working environments.

On Friday, the movement will take center stage in the #MeToo Fashion Show. There, models won't just walk the catwalk; they'll also speak — some for the first time — about their experiences of sexual abuse.

Cognizant of the connection between clothing and victim-blaming, the show's organizer told The Daily Beast: "Having this fashion show is a way to say, 'Regardless of what you are wearing, it's not your clothes that are guilty of what happened to you.'"

In late January, models like Kate Upton began telling their own stories on social media. In an interview with Time, Upton accused Paul Marciano, the co-founder of Guess, of repeatedly groping and harassing her. Marciano denied Upton's accusations and said he fully supports the Me Too movement, but a photographer said he witnessed one of the alleged incidents.

When asked about reporting abuse during a fashion shoot, Upton said, "You have no idea who to tell. And you're constantly told about the models who are OK with this behavior and how successful they are. So you're pressured to be OK with it."

Fashion groups and brands have in the past couple months introduced new rules to protect models and promote safe and respectful working conditions. Before the Harvey Weinstein scandal, luxury brands LVMH and Kering drew up a charter requiring private changing areas, banning alcohol in the workplace and making it easier for models to come forward with complaints. Additionally, companies must now ask models for their consent to participate in shoots that require nudity or semi-nudity.

In the days leading up to Fashion Week, Condé Nast took similar measures with its new model-focused Code of Conduct. The Council of Fashion Designers of America — which is directed by designers like Michael Kors and Vera Wang — announced it would also create private changing areas for New York Fashion Week.