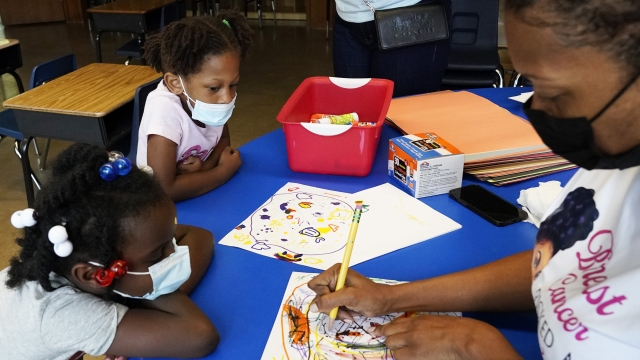 Rhue teaches media literacy, something she says students need now more than ever.

"They're taking this information and saying, 'Oh, that's it, that's the end of the story,'" she said.

For Rhue, those lessons include examining newspapers and even popular memes.

The state of Illinois mandates media literacy lessons for high schoolers, and New Jersey requires the lessons for grades K-12. The goal is to encourage critical thinking among a tech-savvy generation.

"The media, which is what we're using to get our information and to get our, you know, satisfaction from entertainment and persuasion needs to be analyzed, needs to be consumed in a thoughtful way," said Yonty Friesem, the co-director of the Media Education Lab.

That includes encouraging students to ask themselves a few questions about the things they consume.

"The first one is who's the author and what's the purpose of this message?" Friesem said.

News literacy falls under a larger media literacy umbrella and encourages students to understand bias or false information in their news sources, no matter where they get their news.

Ideally, the concept would be taught by different teachers across various subjects, like science and social studies.

"A math class, because you would think about things such as how do we interpret poll numbers, how do we interpret statistics, those kind of things," said Michael Spikes, the director of Teach for Chicago Journalism Project at Northwestern University.

A 2021 report from Common Sense Media shows 38% of tweens have used social media.

And according to a study from the British Journal of Developmental Psychology, students' belief in conspiracy theories are heightened around age 14 — creating the perfect storm for some.

"It you know, it exposes us to so many more voices, a lot more than we heard before. But what is also done is it's opened the door to lots of voices who may have ill intent when they put out certain messages," Spikes said.

Mike Webb, senior vice president of media and marketing for the News Literacy Project, says students are susceptible to both misinformation and disinformation just like adults are, particularly when it comes to social media and things like COVID-19.

"The football player, Damar Hamlin, who got injured — immediately within seconds of his injury, people were saying, 'Oh, that was COVID,'" said Webb.

He says there are a variety of online resources for parents and teachers to help kids be better consumers.

"My favorite one is 'you be the editor' because it puts you in a scenario where there's been a car accident and you have to determine what actually happened," Webb said.

Rhue says she has a sharp bunch, but even they are tripped up from time to time; that’s where the lessons come in.

"Having them learn how to dig deeper as well as supporting them and understanding — it's OK to wonder," she said.