As Damar Hamlin Continues To Recover, NFL Is Changing Course 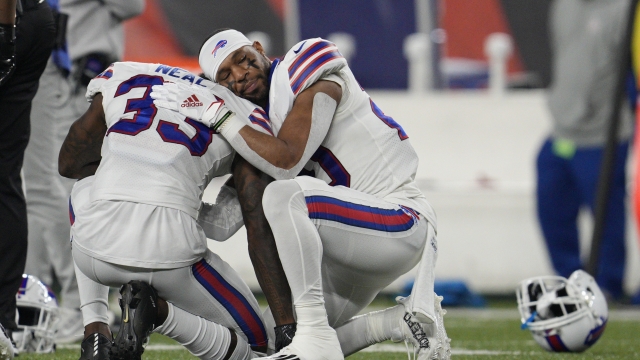 Damar Hamlin, a 24-year-old Buffalo Bills player, is still in the ICU days after he collapsed on the field Monday night — when his heart stopped during a game in Cincinnati.

His breathing tube was finally removed Friday after Hamlin woke up. Now doctors say he's talking on his own.

"To see the players' reaction — they stood up right away and clapped for him," McDermott said. "Amazing, touching to see Damar through my own eyes. I know it's something I've been looking forward to, kind of needing to see, I guess."

Teammates who were distraught on the field Monday night are now feeling that intense relief knowing their teammate is on the mend.

"Being on that field... you lose sleep, you hurt for your brother," said Josh Allen, Buffalo Bills quarterback. "Getting updates, positive updates eases so much of that that pain and that tension."

The NFL said playing the game between the Bills and Bengals would have required postponing the start of the playoffs by a week.

As the Bills prepare to play the New England Patriots this weekend, they're planning a host of tributes, including painting a three, Hamlin's number, on the field and giving number three patches to all the players.

NFL commissioner Roger Goodell commented on Hamlin's condition from his office, as the league approves a new plan for the NFL playoffs.

"Yesterday's news of Damar's improving condition lifted not only my spirits but the spirits of the entire league," Goodell said.

The now canceled Bengals-Bills game was critical to the playoff picture. Should the season end with the Bills or the Bengals within one win of the top seed in their conference and they face a team that would have been seeded lower in the AFC, the championship game will be played at a neutral site.

For now, what matters most to the team, its fans and anyone who watched the tragedy is Hamlin's continued recovery and signs he's on the mend.

"We got our boy, man, you know what I'm saying? That's all that matters. We got our boy," said Dion Dawkins, Buffalo Bills offensive lineman. "The excitement was beautiful. It was amazing. It's given us so much energy, so much bright, high spirits, whatever you wanna call it, it has given it to us."

Yo Murphy played 14 years of professional football and has basically seen it all, but he became choked up during an interview on Evening Debrief.