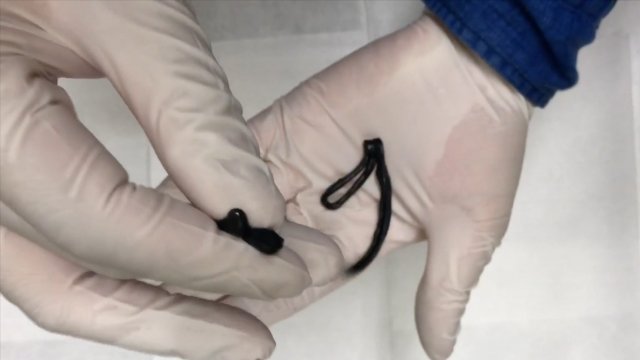 Forget bandages. Researchers have developed a stretchy goop hydrogel that could be the next Band-Aid.

"The material we have developed is like a smart skin. It is stretchable, self-healing, and has haptic feedback, meaning it can actually feel," said Husam N. Alshareef, Ph.D. with King Abdullah University of Science and Technology.

Researchers say the hydrogel could do much more than a simple adhesive bandage. It's biodegradable, so doctors could also implant it into a patient to release drugs that promote healing.

It's just one of several advancements in wound medicine, much of it with roots in 3D printing.

"It runs a whole gamut of being sort of simple to very complex," said John Jackson, Ph.D.

Jackson is one of hundreds of researchers with Wake Forest's Institute for Regenerative Medicine. They're 3D printing entire body parts from live cells that can be sewn into the human body. It's called bioprinting.

In Toronto, researchers have developed a handheld 3D skin printer. It can place layer after layer of skin tissue to heal deep wounds. The entire process takes two minutes.

This 'Living Ink' Degrades Pollutants And Helps With Organ Transplants

Scientists have been able to put bacteria into already-printed objects, but a new approach shows the process might have other applications.

The armed forces are interested in the promise of quickly healing battlefield wounds. U.S. Army researchers are developing an engineered "skin substitute." It's grown from a patient's own cells to treat tissue injuries like burns. The army says burns account for as much as 30 percent of battlefield casualties. Wake Forest is part of a group of schools that works with the military. They've developed a scanner that analyzes a deep wound or burn and then "prints" skin cells on the area.

"We could could get 80 percent covered with epithelial cells within about two weeks after we treated. It normally takes six to eight weeks for a wound that size to heal,"Jackson says.

The private sector is getting in on the action too. It's projected the global 3D printing medical devices market will be a $1.88 billion industry by 2022.

But we're a long way off from anything of "Westworld" proportions. Widespread bioprinting is at least a few years off. As of 2016, only 99 of more than 5,000 registered hospitals in the U.S. had a medical 3D printing facility.

Hydrogels are still a ways out, too. So far they've only been tested on animals and are awaiting larger preclinical tests. Jackson says, conservatively, he gives it five years.