The Man In The Middle Of The Memphis Sanitation Workers Strike 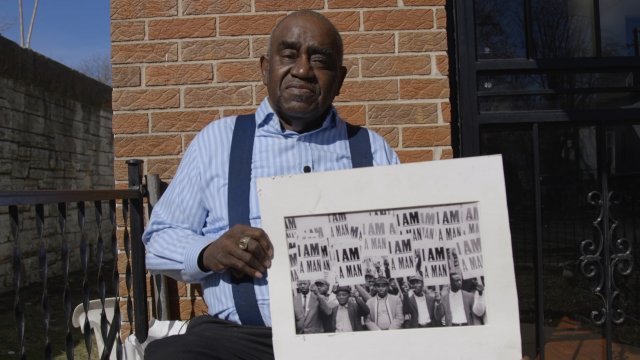 James Riley is front and center of one of the most iconic images from the Memphis, Tennessee, sanitation workers strike of 1968.

He's one of the more than 1,300 men from Memphis' sanitation department and public works who protested low wages and fought for better working conditions.

At that time, men worked long hours and for little pay — as little as a dollar an hour. In 1968, wheeled barrels weren't a thing. Men had to empty 55-gallon drums. When lifting the drums to dump the waste, all manner of detritus and maggots would fall on the men and get in their clothes.

"That waste come down on your head like that, all down your back," Riley said.

'Shut It Down': Using Economic Disruption To Force Reform

Demonstrators in St. Louis are turning to economic protests to prompt police reform after the acquittal of a police officer who killed a black man.

One of the many reasons men called for change was because of faulty equipment — the same reason the issue in Memphis exploded that year. Two sanitation workers sheltering from the rain within the bed of the garbage truck were crushed to death by a malfunctioning compactor. That truck stayed in commission even after their deaths.

"I did have to drive that particular truck one time because my truck wasn't working, wouldn't start, whatever," Riley said.

The deaths of the two sanitation workers led to a strike that was aided by Martin Luther King Jr.

At the time, King was working on the Poor People's Campaign — his final crusade — to demand economic justice for poor people in the U.S. On March 28, 1968, he marched with Memphis sanitation workers. That's when Riley was captured in time.

How Martin Luther King Jr. Is Resurrected Through Art

Artist Mark Ulriksen explains his inspiration for depicting Martin Luther King Jr. alongside Colin Kaepernick in his cover for The New Yorker.

"I was at Clayborn Temple. They were sending money and food and aid to the sanitation workers. I was in there, back there doing something, and they called me and said, 'Riley, come out. Quick!' And I just ran out. That's why I didn't have a sign," Riley said.

The men later won concessions from the city, but not before losing King to a gunman.

"The morning he was killed, when they called down to where I was, I was at Clayborn Temple," Riley said. "Said he'd gotten shot. I got there before anybody did because when I got there, his body was still on the floor."

King died fighting for Memphis sanitation workers. But the strike's lasting influence can be seen in demonstrations today.

Protesters have co-opted the "I Am A Man" sign while fighting for higher wages and equal treatment. And Riley has been recognized for his contributions.

Reflecting on his own impact, Riley said, "I feel like I was a part of something worthwhile."