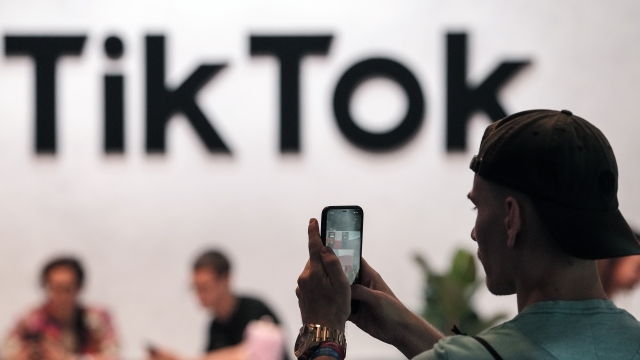 Therapist Courtney Tracy says TikTok is helping people talk about mental health. But she also warns of the dangers of misinformation.

But the short-form video platform is also a growing home for mental health professionals helping viewers seek out support. Hashtags like #TherapistsOfTikTok have around 570 million views on the platform, while #MentalHealth has over 43 billion views.

Courtney Tracy is a therapist and mental health advocate with more than 1.8 million followers on TikTok.

"I started making videos on social media in late 2019. I went through a major family tragedy in the beginning of 2019 that caused me to have a lot of mental health issues. So, as a therapist, I wanted to show up online and tell the truth about that," Tracy said.

Through her work, she speaks honestly about her struggles with trauma and borderline personality disorder, also known as BPD. And her videos answer questions about therapy; destigmatize mental illnesses like BPD, anxiety, depression and addiction; and remind viewers that mental health professionals are human too.

The Nashville man posted about the brothers on his TikTok account.

"As therapists we hear so much of other people's difficult lives and we carry that around because we do care — as much as some people think we don't,  we really do. And that weighs on us. So, when we have to hold other people's stuff, and our own stuff, it can get really heavy sometimes," Tracy continued. "One of my favorite types of videos to make are my point-of-view videos where I play a therapist, and then I also play myself as a client. And I think some of the best responses that I've received are people who haven't been to therapy before who say, 'Wow, these are my symptoms,' or 'This is something that I would want to talk about in therapy and seeing the way that a therapist might respond to something that I might say makes me feel so much safer going into the space.'"

Tracy says viewers — including other mental health professionals — have responded positively to her honesty and candidness.

That conversational tone is common on TikTok, and Tracy says it's fostering more conversations about mental health care.

Leslie Segla and her 11-year-old niece have more than 400,000 followers and millions of likes on their videos.

Experts like Tracy warn, however, of the dangers of misinformation from the platform — especially from creators who aren't mental health professionals.

One study from earlier this spring found that of the top 100 TikTok videos about mental health, around half were "general" informational videos on the subject and around 40% involved users talking about their own personal experiences and stories.

While the study notes the personal stories posted by users were typically met with support and validation, more research should be done "on the potential role of intervention by health care professionals."

"If we don't understand truly mental health, if we're getting misinformation, or we're misanalyzing ourselves or our own symptoms, then yes, we're talking about it more, but we're not actually making progress for ourselves or for our communities," Tracy said. "And I think that there's going to take some fluctuation and some reorganizing, but I think it's a good thing. The more voices that we have out there talking about mental health, the more they'll become refined, and then the more it becomes actually just a normal thing to be talking about, which is the goal."

Teachers typically rely on their own money or donations to help prepare for a new school year, but now social media influencers are joining the cause.