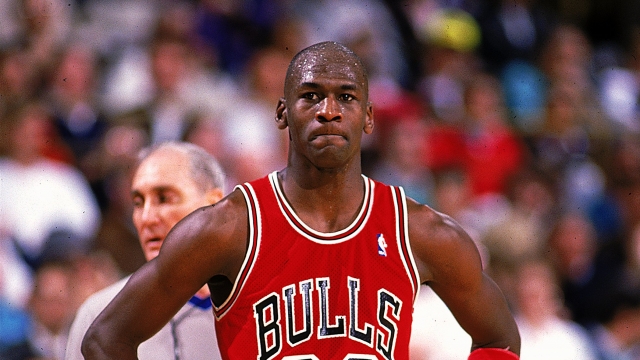 Along with remaining silent on social issues, Jordan's been criticized for not responding to violence surrounding the release of his signature shoes.

Monday, the greatest basketball player ever penned a public letter condemning police brutality and offering support to police around the country — that's a really big deal. Here's why.

In a time when athletes seem to be using their platforms more often to speak about social issues across the country ...

"When we look at the facts, it's hard to deny there's a real problem in our society," Lynx player Rebekkah Brunson said during a press conference.

SEE MORE: WNBA Players Won't Be Fined For Wearing Protest Shirts After All

... Michael Jordan has long been held up by critics as the shining example of an athlete choosing profit over advocacy.

"You can't be afraid of losing shoe sales if you're worried about your civil and human rights. [Jordan] took commerce over conscience," NBA Hall of Famer Kareem Abdul-Jabbar said.

This reputation goes back to a quote attributed to Jordan in the 1995 book "Second Coming." Explaining why he didn't endorse Democratic candidate Harvey Gantt's unsuccessful Senate campaign, he reportedly said, "Republicans wear sneakers too."

Jordan's spokeswoman denies he even said the infamous line in the first place, but either way, it has colored opinions of the NBA star.

Along with remaining silent on social issues, Jordan's been criticized for not responding to shootings and violence surrounding the release of his signature shoes.

ESPN's Jemele Hill wrote in 2011: "[Jordan] has profited considerably from the black community's unconditional support. By not addressing this lingering violence he seems to be making clear that he's only interested in the black community if it can enhance his financial empire."

Fast-forward to today and Jordan has made his most public and high profile statement on any social issue since he entered the league in '84.

Jordan told ESPN's "The Undefeated," "We need to find solutions that ensure people of color receive fair and equal treatment AND that police officers — who put their lives on the line every day to protect us all — are respected and supported."

Jordan is donating $1 million to the Institute for Community-Police Relations, founded by the International Association of Chiefs of Police. He'll also give another million to the NAACP Legal Defense and Educational Fund.