Migrants Seeking Asylum Face Uncertainty Once They Reach The U.S. 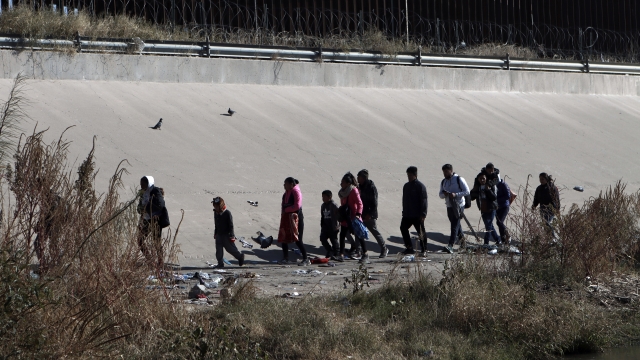 Advocates say the real issue is not Title 42 restrictions but the broad need for immigration reform.

The constant of El Paso, Texas, is the flowing Rio Grande — the river between the U.S. and Mexico. The other constant is migrants who seek to cross it from the other side.

Giovanny Garcia and his son Anderson were hopefully waiting with other Venezuelan refugees seeking asylum in the U.S. So were Samuel Cedeño and his friend Alfredo.

"Because there’s no money, there’s no work. There's nothing," Garcia said.

"The idea is to cross the border and seek a better quality of life," Cedeño said.

Their immediate path to prosperity is carefully treading on stones from the Mexican side of the Rio Grande, crossing into the U.S. side and ultimately into the arms of the Border Patrol.

Officials in El Paso say there are thousands of refugees lined up on the other side, however Newsy didn’t find evidence of that in our tour through in the city of Juarez. What we did find were people in limbo.

"When I’d leave my house, I was always harassed by gang members on my way to visit my mom. I felt unprotected," Mendoza said.

They originally crossed into the U.S. months ago near the Texas Gulf Coast. Now they're stuck at a shelter in Juarez waiting. They were expelled with hundreds of thousands of other migrants under the public health order Title 42. The law has been a de facto immigration enforcement tool since the pandemic. Federal immigration agents can expel migrants without allowing them to claim asylum, to protect the U.S. against COVID.

Officials and aid groups along the border are trying to prepare for whatever may or may not come as the restrictions could still expire Wednesday.

Ruben Garcia runs Annunication House, a shelter and refugee services organization and he says those who do make it across face uncertainty.

"The non-expellable nationalities are coming through and they're coming through in very significant numbers. And so the need is for hospitality for them," Garcia said. "At this moment the numbers of refugees that are being processed by Border Patrol and then released is greater than the hospitality that is available."

"Because we can't continue to go at this rate and continue to have thousands and thousands of people in there, have hundreds of thousands, millions of dollars, because at the end of the day, this is strictly a band-aid for something that's bigger than El Paso and in my opinion, is buried in the U.S.," said El Paso Mayor Oscar Leeser.

Immigrant rights advocates say invocation of Title 42 does not address the need for broad immigration law reform nor does it consider why the refugees are crossing.

"We've been calling it for immigration reform and updating asylum policies. What we've seen right now in our city, what we're seeing, what the country has seen, honestly, is just the failure of the federal government to step up and to deliver the resources that we need," Lesser said.

Instead activists say the status quo so far is to enforce the current laws, so parties can campaign on humanitarianism or militarization of the border.

"So that I can give my kids a better education. So I can carry out my son’s operation and am able to help my mother who stayed in Honduras," said Julissa Yasmin Maldonado, a Honduran asylum seeker.

The status quo for the migrants is to leave their home countries that are often broken for one they think works.