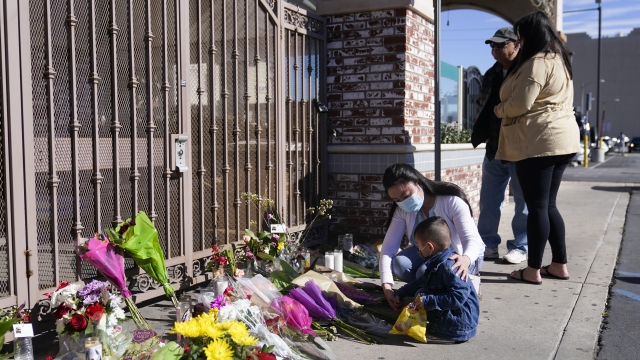 A gunman killed 11 people and injured nine others at a dance studio in Monterey Park, California during the town's Lunar New Year celebrations.

It was supposed to be a celebration for Lunar New Year. The year of the rabbit traditionally symbolizes hope and peace, but in Monterey Park, California, it was anything but peaceful.

The two-day festival was held in person for the first time after being postponed for two years due to the pandemic. Then at the community event, 11 people lost their lives and nine others were injured by gun violence.

The Los Angeles County Sheriff's Department says the suspect, 72-year-old Huu Can Tran, opened fire in Star Ballroom Dance Studio Saturday evening. He later took his own life after a stand-off with authorities.

"You wouldn't think that a 70-year-old man would, could, do something like that, so it made me really sad," said student Jessica Ruiz de Esparca.

Media trucks and journalists still fill the parking lot of the dance studio, but past them is a makeshift shrine honoring the victims.

Chester Chong, the chairman of the board at the Los Angeles Chinese Chamber of Commerce, spoke fondly of his friend who he says died in the shooting. Chong and the man, who he said was a teacher and "master dancer," used to meet at a local restaurant to pass time.

The makeshift memorial, apart from flowers and candles, also include oranges. Chong says the oranges act as prayers for the dead to pass into the after life.

While city workers now clean up the remnants of the lunar celebration, the city is quietly healing.

"I feel very hurt for the whole Asian community because they are part of my community now," said Jerry Dominguez, a resident of Alhambra, California.

Asian people make up 65% of Monterey Park's population. It's known as the first suburban Chinatown.

Dominguez lives in Alhambra, about a 10-minute drive from Monterey Park. It's also where the suspect made a second stop at another dance studio, but this time, the suspected gunman was disarmed after people wrestled the weapon away from him.

Dominguez says while healing is hard, the community has to be strong.

"We have to be strong, strong like that young man where I am standing across the street, that he had the courage and the divine strength to forget about himself and go after this person," Dominguez said.