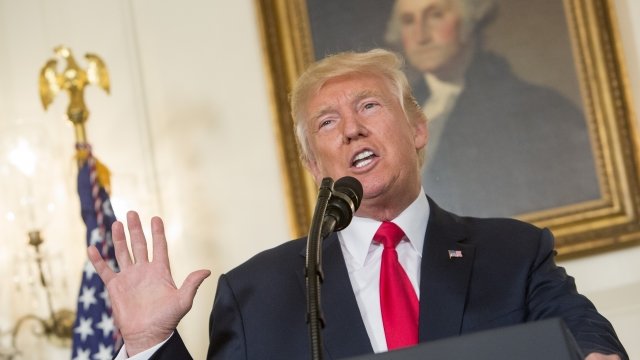 The CEOs of Merck, Intel and Under Armour have resigned from the council over Trump's initial response to the violence in Charlottesville, Virginia.

"We condemn in the strongest possible terms this egregious display of hatred, bigotry and violence on many sides, on many sides," Trump said Saturday.

Trump amended his statement at a press conference Monday at the White House, but it seems the damage was done.

"Racism is evil — and those who cause violence in its name are criminals and thugs, including KKK, neo-Nazis, white supremacists, and other hate groups are repugnant to everything we hold dear as Americans," Trump said.

The first to drop out of the manufacturing council after the events in Charlottesville was the CEO of Merck pharmaceuticals, Kenneth Frazier. Frazier said American leaders need to "clearly [reject] expressions of hatred, bigotry and group supremacy."

Then came the CEO of Under Armour, Kevin Plank. Plank sent out a tweet Monday morning saying "there is no place for racism or discrimination in this world. We choose love & unity."

Twitter users then called on Plank to take a stronger stand. He issued another statement stepping down from the council and said he would focus on promoting diversity and inclusion at his company.

After that came an announcement from the CEO of Intel, Brian Krzanich. Krzanich condemned the white supremacists marching and called out leaders in Washington for seeming "more concerned with attacking anyone who disagrees with them."

Then on Tuesday, Scott Paul, the president of the nonprofit Alliance for American Manufacturing, announced he's leaving the manufacturing council, but he did not elaborate on why.

CEOs have dropped out of President Trump's councils before over disagreements.

SpaceX founder Elon Musk and Disney CEO Robert Iger bowed out of their respective positions when Trump said he would pull the U.S. out of the Paris climate agreement.

And in February, then-Uber CEO Travis Kalanick stepped down from his post on the business council amid controversy surrounding the Trump administration's travel ban.

Tuesday morning, Trump responded to the CEOs' decisions on Twitter, saying he has many people to take their place.

For every CEO that drops out of the Manufacturing Council, I have many to take their place. Grandstanders should not have gone on. JOBS!