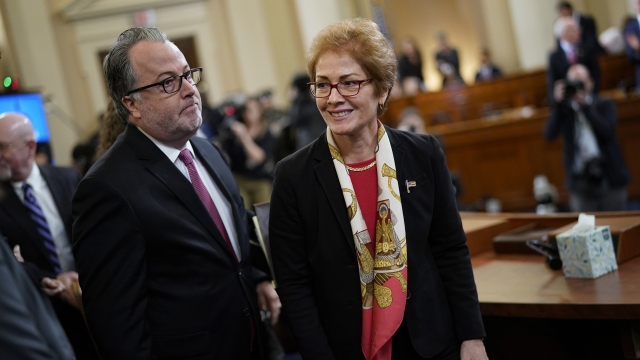 This is the latest set of documents from House Democrats, as they continue to uncover more evidence on the possible surveillance of Yovanovitch.

House Democrats released new documents on Friday about the possible surveillance of former U.S. Ambassador to Ukraine Marie Yovanovitch. The documents are from Lev Parnas, an indicted associate of Rudy Giuliani.

Lawmakers released the documents ahead of the Senate's impeachment trial, which is expected to resume on Tuesday.

The newly released documents include screenshots of text messages that appear to show Connecticut congressional candidate Robert Hyde, texting a foreign number from Belgium. Hyde is accused of monitoring Yovanovitch when she was working in Kyiv.

In one of the screenshots, the unidentified person with the foreign number sends Hyde a screenshot of an official photo of Yovanovitch, writing "I will give you the address next week." Hyde replied: "Awesome."

Hyde has since denied ever keeping tabs on Yovanovitch and said on Twitter that he was never in Kyiv.

The new docs also show communications between Parnas and Derek Harvey, an aide to Rep. Devin Nunes of California, who helped setup interviews with Ukrainian officials.

The new documents also included photos of President Trump and Parnas together, as well as a card to Parnas from the president. The president told reporters on Thursday he doesn't know Parnas.

On the same day, Secretary of State Mike Pompeo told conservative radio host Tony Katz he will look into the possible surveillance saying "we will do everything we need to do to evaluate whether there was something that took place there."

In a separate interview, Pompeo said he was not aware that Yovanovitch may have been under surveillance. He also said he has never met Parnas.

Ukraine has already said it's opening its own investigation in connection with information released by House Democrats earlier this week. It says it wants to work with U.S. authorities on this investigation.

Yovanovitch, who was removed from her post in May, was a key witness in the House's impeachment inquiry into President Trump. She testified that a Ukrainian official told her that Giuliani had orchestrated a "concerted campaign" to force her out over allegations that she criticized President Trump.