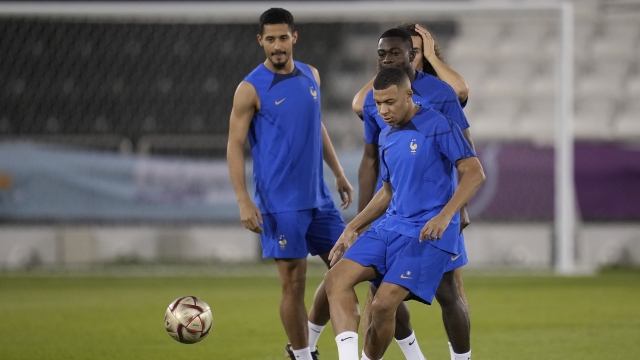 As Morocco faces France in the World Cup, many players and fans grapple with family tales of colonial history, immigration and national loyalty.

Hind Sabouni bristles with pride as she recalls her country's history-making World Cup run as it eliminated one European soccer powerhouse and former colonial power after another — Belgium, Spain and Cristiano Ronaldo's Portugal — to become the first African and Arab nation to reach the semifinals.

For the 26-year-old English teacher in Morocco's capital, and many of her countrymen both inside the North African nation and throughout the diaspora, it's about to get more complicated. Next up is France: The defending champion and Morocco's former colonial ruler for much of the first half of the 20th century.

Wednesday's match has political and emotional resonance for both nations. It dredges up everything that's complex about the relationship in which France still wields considerable economic, political and cultural influence.

"This game is one of a kind," Sabouni said. "Especially since France is next to beat."

"We can show the rest of the world that Morocco is no longer France's backyard."

For the former protectorate, the match against the defending champion is an opportunity to show that Morocco is a formidable foe — on the soccer pitch at least — even though immigration between the two countries has blurred the lines for many in France and Morocco about who to support Wednesday in Qatar.

Over the past decade, Morocco's relationship with France has changed. Sabouni said her generation of Moroccans is tired of France's dominance. Young Moroccans, she said, "speak English instead of French, they buy more American products than French ones and even those who want to seek a better life abroad try to avoid France."

"Even though this is just a football game, some people view it as an opportunity for revenge," Sabouni said.

A 3-0 win over Croatia on Tuesday sets up a meeting with either France or Morocco in Sunday’s title match.

Kenza Bartali, a communications professional in Rabat, sees no political overtones to the match. She obtained her master's degree in France, and lived for two years in Paris and the southern cities of Nice and Toulon between 2016 and 2018. She made "wonderful friends" who are still her friends today. "Most Moroccan students were treated with respect," the 26-year-old said.

Still, there is no doubt which team she's supporting.

"I sincerely hope that Morocco advances to the final," Bartali said. "I am aware that it will be difficult because France is a very good team, but we are hoping for the best."

Sabouni's sentiments resonate with Moroccans and other North Africans in France. Although the younger generation of immigrants and their descendants appear to be more at ease with multiple identities and languages in France, they still face institutional discrimination, racial and ethnic prejudice in public life, economic hardship and lack of job opportunities.

As in previous World Cups, France once again has turned to their national soccer team made up of players from diverse backgrounds as evidence that the country has indeed become a melting pot despite lurking prejudice, stoked against immigrants by elected right-wing politicians.

"Cultural changes and changes in life on the ground do have an effect and the team represents that," said Laurent Dubois, a professor at University of Virginia in Charlottesville who has authored two books on French and international soccer.

"The way the players inhabit being French and don't seem to have an issue with also being African or anything else at the same time is an antidote to the immigrant resentment on the right."

In Morocco, people have embraced the team's foreign-born players as their native sons. They welcome the experience and professionalism they bring from Europe's top clubs and are proud they chose Morocco as their national team when they could have played for the countries of their births, from Spain to Canada to Belgium and beyond.

The Morocco national team depends heavily on the diaspora, with 14 of the squad's 26 players born abroad, including their French-born coach, Walid Regragui, the highest proportion for any team at the World Cup.

Like Morocco's supporters at home and an estimated 5 million scattered around Europe and beyond, many players grapple with family tales of colonial history, the challenges of immigration and questions of national loyalty. They want desperately to detach from the burdens of the past and win a place in the World Cup final — whether home for them is in France or Morocco, or Belgium, Canada, Tunisia, Algeria or elsewhere.

"Most of the Moroccan players who were born abroad chose Morocco as their national team because they feel they play for more than just to win a football match," said Maher Mezahi, a Marseille-based Algerian journalist covering African football. "They play to elevate national pride and to make their family proud."

For Regragui, his and his player's dual identities are meaningless in the biggest match the squad has faced.

"When we play for the Moroccan national team, we are Moroccans," Regragui said.