Over A Month After Maria, Much Of Puerto Rico Is Still Without Power 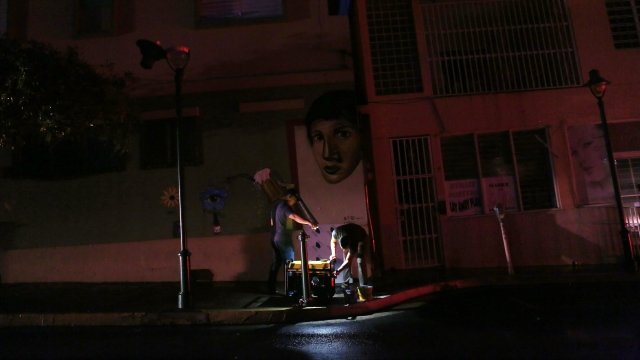 As of Tuesday, power was restored to only a quarter of the island since Maria hit with its heavy rains and 155 mph winds.

About a month after Hurricane Maria wreaked havoc on Puerto Rico, many there are still without electricity.

As of Tuesday, power was restored to only 24 percent of the island since Maria's heavy rains and 155 mph winds.

The New York Times notes residents have to get creative to make do; some share generators with neighbors, while others cook with bonfires fueled by fallen tree branches.

Gov. Ricardo Rosselló pledged to restore power to 95 percent of the island by mid-December. But even he said that goal is "aggressive."

One of the biggest issues is with the power grid itself, which was already in bad shape before Maria hit.

Project Loon, an experimental balloon-powered internet program, teamed up with AT&T to help the island reconnect.

Preventative maintenance and upgrades were put on the back burner to save money. And the median age of the island's power plants is 44 years; the industry standard is 18 years.

A colonel with the U.S. Army Corps of Engineers in Puerto Rico told USA Today it ordered $130 million worth of supplies from the U.S. mainland to get things running again.

But actually getting those supplies and the personnel to Puerto Rico is another story. The island's airports and ports are packed with all kinds of aid shipments, making supply deliveries slow and difficult.