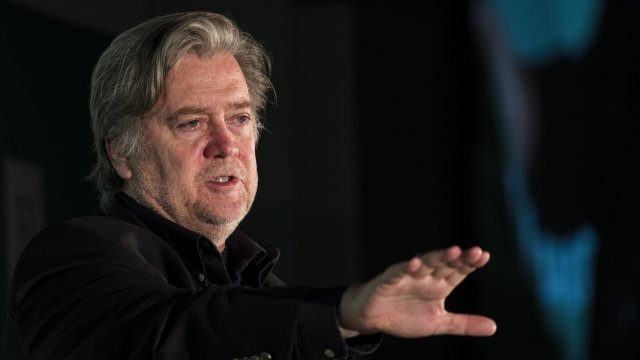 Robert Mueller's team will reportedly interview Steve Bannon as part of Mueller's investigation into Russian meddling in the 2016 election.

Steve Bannon has reportedly negotiated with special counsel Robert Mueller's team and won't be testifying in front of a grand jury — at least for now.

The New York Times was the first to report Tuesday that Mueller subpoenaed Bannon to testify in front of a grand jury as part of his investigation into Russian meddling in the 2016 presidential election.

People familiar with the investigation told NBC that Mueller did that "in order to thwart any potential attempt by the White House to pressure Bannon into refusing to cooperate."

Trump Could Face An Interview With Special Counsel Robert Mueller

It's possible Donald Trump will be interviewed by Robert Mueller as part of the investigation into Russian meddling in the 2016 presidential election.

Bannon is expected to be a lot more forthcoming talking to Mueller's team than he was with members of the House intelligence committee.

Bannon's lawyer reportedly told lawmakers Tuesday that the former Breitbart executive would be able to answer Mueller's questions because executive privilege would not apply.

An exact date for Bannon's reported interview has not been announced. As of Wednesday morning, neither Bannon nor anyone from Mueller's office had commented on the agreement.