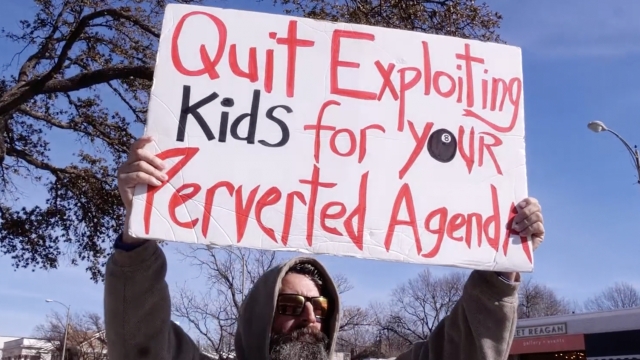 What draws White nationalists, Christian fundamentalists and social conservatives to coalesce on a Dallas Street? For the last year — the answer is drag queens.

Outside Buzz Brews Kitchen the protest group on this Saturday in January included three people waving a flag from a neo-fascist group called the American Nationalist Initiative. It was the usual tense scene — this time as armed people clad in black and wearing masks acted as security for the drag show supporters, who vastly outnumbered those protesting. Police monitored everything.

It was all because of a drag brunch where performers dressed in character and lip synched pop tunes.

"So we had the ad up on our our website and then on Eventbrite and just basically get out the word about the drag brunch with the particulars, the date, the time, the cost and all that," said Ernest Belmore, owner of Buzz Brews. "And that is adult friendly, basically, you know, and that was it. So someone copied and pasted that website, that ad from one of our mediums and then added kid friendly. And that was never part of our campaign."

It wasn't part of the campaign, but some parents did bring their children. An online disinformation campaign framed the gathering as explicit — and that brought the crowd outside.

"So our goal is to end these shows in the state of Texas because we don't believe that a drag show is a place to bring kids. And so we come out in protest and, you know, we're just hoping that we can put some pressure on our lawmakers and these venues to get these shows banned," said Kelly Neidert, founder of Protect Texas Kids.

Protect Texas Kids is a group opposed to drag shows, usually grounded in a fear of exposing kids to gender-bending sexually explicit content.

Neidert and other social conservatives use Twitter to publicize and stoke opposition to these events which, in turn, are often used as recruiting tools by fascists and neo-nazis.

"I've been very vocal about disavowing them and I can't control if they show up or not. I can tell them to leave and they won't, which is what happens. But at the end of the day, you know, I'm not going to just not do anything because certain bad people might show up," Neidert said.

Posts targeting drag shows spread like wildfire online. The aim is to characterize drag shows as harmful to children, an accusation critics say is dangerous for the LGBTQ community.

Drag organizers say there is a spectrum of types of events: from G rated to NC-17, where kids wouldn’t be invited. That was the case at a recent event Scripps News attended in San Antonio. Portions were sexually explicit. But we did not observe any children in attendance.

Independent journalist Steven Monacelli has documented many of these events and says what may be genuinely held concerns about drag shows are often twisted.

"In Texas in particular, what we've seen is this sort of pattern emerging around drag shows and LGBTQ+ events," Monacelli said.

But it’s not just Texas. GLAAD has tracked nearly 150 anti-drag protests and threats in the past year in virtually every state.

For example, the FBI-designated right wing extremist militia "This is Texas Freedom Force" publicized their protest of that San Antonio drag show in December. They came armed.

Members of the fascist group Patriot Front joined them, as well as religious fundamentalists.

"I can tell you, these people that are over here are not trained like our guys. Our guys go through multiple trainings through our organization. Plus, half the guys you see out here are Marine Corps, or they're former law enforcement," said Brandon Burkhart, the president of This is Texas Freedom Force.

Across the street another heavily armed group clad all in black, some wearing rainbow arm bands, provided protection to drag show supporters.

This past September, anti-drag activists focused their anger on a church’s drag bingo event in Katy, Texas. They shared video recorded inside portraying a fundraiser and clothing drive for transgender teens as evidence of sexualizing kids — as opposed to a show of support and inclusion, as intended by the church.

"I mean, they talked about underwear, but last I checked, everybody wears underwear," said Pastor Heather Tolleson, of First Christian Church of Katy.

Scripps News obtained security camera photos from the event of the anti-drag activist and twitter influencer Tayler Hansen, in women’s clothes, trying to hide himself. In his own report he shows himself in a mirror.

The church pastor says he presented himself as transgender — even going into a women’s restroom.

"But nothing that happened that night was inappropriate. It's just the way it's presented into the world and the audience in which it goes to," Tolleson said.

"It was flood waters of hate, from direct messages and threats and emails and phone calls," she said.

"It's sad that it has come to that point. But if they're going to threaten us and think that coming armed is going to scare us into a closet, then we've already fought tooth and nail to get out of that's not going to happen," said Valerie Stout, a San Antonio resident.

The Texas Legislature is in session and Republicans who control deep majorities in both Houses are backing laws targeting drag shows, classroom lessons about sexuality and gender affirming care for children.