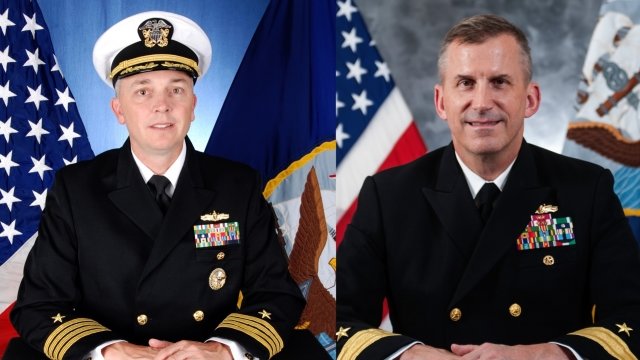 The U.S. Navy dismissed two more of its leaders Monday after a string of collisions earlier this year.

In a statement, the Navy said Rear Adm. Charles Williams, commander of Task Force 70, and Capt. Jeffrey Bennett, commander of Destroyer Squadron 15, were both relieved of duty because of a "loss of confidence in their ability to command."

Both men worked in the Japan-based 7th Fleet. Williams oversaw the fleet's aircraft carriers, cruisers, frigates and destroyers; Bennett was in charge of the Navy's largest forward-deployed destroyer squadron.

In August, the Navy removed Vice Adm. Joseph Aucoin as commander of the 7th Fleet.

As commander, Aucoin oversaw all four American naval ships involved in accidents in the Pacific this year.

Ten U.S. sailors died after the USS John S. McCain collided with a tanker in August. The other incidents include the USS Antietam running aground in Japan, the USS Lake Champlain hitting a fishing boat, and the USS Fitzgerald colliding with a merchant vessel. That last incident killed seven U.S. sailors.

Secretary of the Navy Richard Spencer and Chief of Naval Operations Adm. John Richardson are scheduled to testify about the incidents Tuesday in front of the Senate Armed Services Committee.