Netanyahu Fails To Form A Government For The 2nd Time 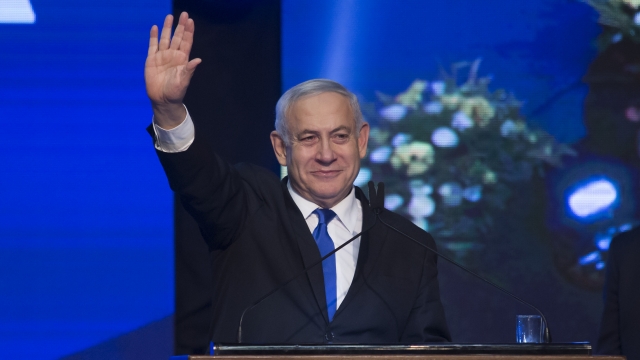 Netanyahu made the announcement in a video on Monday. Israeli President Reuven Rivlin gave him 28 days to form a government after the country's last two elections ended in a deadlock.

On Monday, the president said he would hand the mandate to Netanyahu's rival Benny Gantz, the leader of the centrist Blue and White party.

This is the second time Netanyahu, leader of the Likud party, has failed to form a government in six months. If Gantz takes on the task — and he's signaled that he will — it will be the first time someone other than Netanyahu has been asked to do it in more than a decade.

After the country's last election in September, Rivlin proposed that Netanyahu and Gantz essentially share the role of prime minister, but a unity agreement couldn't be reached. Gantz made it clear he didn't want to serve under Netanyahu while the latter was facing possible corruption charges.

The prime minister is the subject of three corruption investigations. Local media outlets report prosecutors will decide on whether to indict him by the end of the year.

Netanyahu says his failure to form a government is Gantz' fault. Netanyahu said: "Over the past few weeks I've made every effort to bring Benny Gantz to the negotiating table. Unfortunately, he just simply refused time after time."

In a statement, the Blue and White party said: "The time of spin is over, and it is now time for action. Blue and White is determined to form the liberal unity government, led by Benny Gantz, that the people of Israel voted for a month ago."