Nevada Legalized Recreational Weed But Was Way Short On Distributors 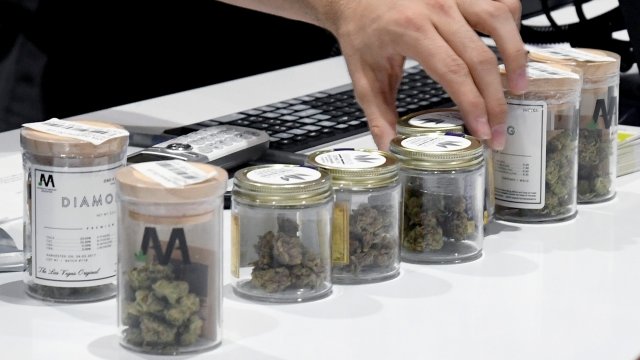 Gov. Brian Sandoval has endorsed a "statement of emergency" for recreational marijuana regulations because dispensaries are running out of weed.

Nevada is dealing with a high-profile emergency — a recreational marijuana shortage.

Gov. Brian Sandoval has endorsed a "statement of emergency" for recreational marijuana regulations because the state's dispensaries are quickly running out of weed.

This statement of emergency allows officials to decide if they want to adopt an emergency regulation that could ease the shortage.

The problem is marijuana distributors. Nevada law requires distributors to apply for and receive a license from the state. But when legal sales began July 1, the state had zero licensed pot distributors.

But marijuana sales had gotten off to a blazing start. The Nevada Dispensary Association estimated legal recreational marijuana sales were between $3 million and $5 million in the first weekend alone.

Medical Marijuana Is Safe From A Federal Crackdown For Now

Congress included a provision in its new budget bill that says the Department of Justice can't spend money on medical marijuana prosecutions.

The state currently has 47 licensed retail marijuana stores, but they're running out of inventory fast.

The statement of emergency notes that lack of product could force businesses to close. That would mean people lose their jobs and the state loses out on a lot of revenue.

The Nevada Tax Commission is scheduled to vote on the emergency regulation Thursday.