The Stakes Are High In Sen. Menendez's Corruption Trial 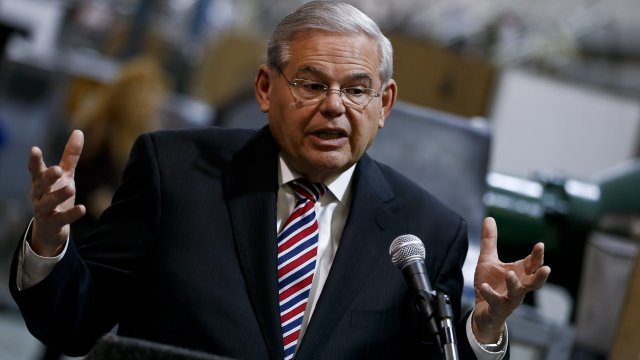 If Democratic Sen. Menendez is found guilty of corruption, the makeup of Congress could tilt even further in the GOP's favor.

A trial that could reshape Congress is kicking off this week. New Jersey Democratic Sen. Robert Menendez is appearing in court to face allegations of corruption.

The case centers around wealthy eye doctor Salomon Melgen. Menendez is accused of using his office to advocate for Melgen's interests in exchange for expensive campaign contributions and gifts.

Melgen is linked to hundreds of thousands of dollars in campaign contributions for Menendez and a super PAC that backed him in 2012. He also flew Menendez out to his Dominican Republic villa several times — gifts that Menendez didn't disclose.

And Menendez weighed in to support Melgen on a $9 billion Medicare dispute with the Health and Human Services Department, and a $500 million security contract with the State Department. Prosecutors say those were quid pro quo acts of corruption.

Menendez is the first sitting senator to be charged with bribery since 1981. He claims he's innocent and is fighting the charges. If he loses, things could get really interesting.

A conviction would increase political pressure on Menendez to leave the Senate — either voluntarily or with a two-thirds vote to remove him from office.

If that happens, it falls on New Jersey Gov. Chris Christie to pick Menendez's successor. He could choose a Republican to flip Menendez's seat to the GOP.

But Christie's last term in office ends in January 2018. Senate Democrats might try to stall Menendez's potential departure until after Christie leaves, in hopes New Jersey will vote in a Democrat to succeed him.

The fate of Menendez's seat matters: Republicans lost their health care reform push this summer by one vote. A conviction for Menendez would give the GOP a rare opportunity to add another seat to their majority.

Either way, this story doesn't end well for Melgen. He was found guilty of Medicare fraud in a separate case back in April and faces life in prison.