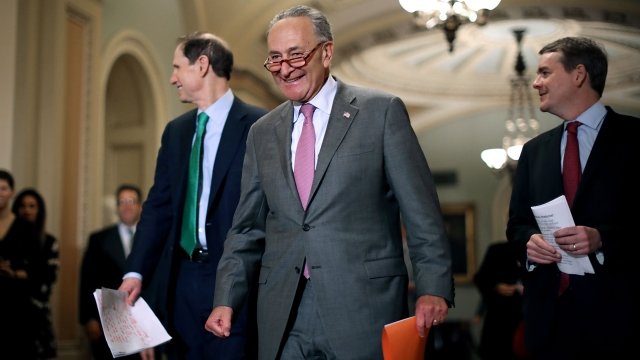 The GOP is looking to reform the tax code after failing to repeal Obamacare. And Democrats say they'll help — but not without a price.

Forty-five Senate Democrats sent Republican leadership a letter Tuesday. They said they'd be willing to work across the aisle, but only on three conditions: The tax reform can't be a veiled tax cut for the top 1 percent; it can't add to the deficit or cut from programs like Medicaid, Medicare or Social Security; and must go through regular order, rather than a process like reconciliation that allows for a simple majority vote.

Three Senate Democrats — all of whom are from states President Donald Trump carried and are all up for re-election — didn't sign the letter. They were Joe Donnelly of Indiana, Joe Manchin III of West Virginia and Heidi Heitkamp of North Dakota.

But Senate Majority Leader Mitch McConnell wasn't buying it. He said Democrats didn't want to address "most of the principles that would get the country growing again."

John McCain Gets His Maverick Groove Back

But Congress might get in its own way on passing tax reform.

Congress has to raise the debt ceiling before Sept. 29. That effort could distract from work on the tax code or vice versa.

Correction: A previous version of this story said there could be a partial government shutdown if Congress does not raise the debt ceiling. Government shutdowns are tied to the budget, and the government is currently funded through Sept. 30.