Nielsen: Migrants Aren't Being 'Turned Away' But Told To 'Come Back' 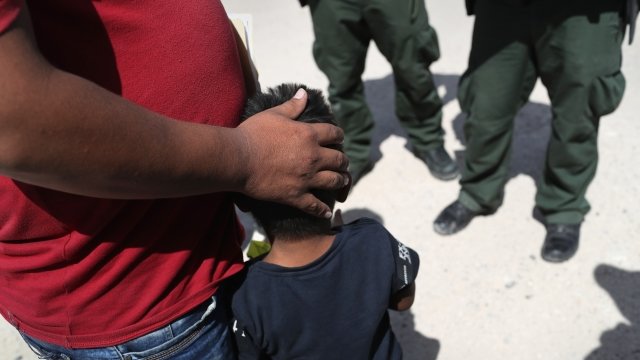 The Trump administration says migrants could avoid prosecution by going to ports of entry. But ports of entry aren't letting them through.

During her appearance at the White House press briefing Monday, Homeland Security Secretary Kirstjen Nielsen repeatedly encouraged immigrants to avoid breaking immigration law by claiming asylum at ports of entry along the U.S.-Mexico border. A reporter chimed in with a counterpoint.

"People are being turned away from ports of entries, Madam Secretary," a reporter shouted.

Last week, The Washington Post reported on a father and son who had tried nine times in nine days to get to a port of entry in El Paso, Texas, and apply for asylum. They were turned away each time.

A "zero-tolerance" policy announced in April has led to at least 2,000 migrant children being separated from their guardians.

And their story isn't unique. Customs and Border Protection officials have reportedly been turning people around for weeks, telling them they can't currently apply for asylum because the port of entry is at capacity.

According to the Post, some immigration lawyers say CBP is obligated to process anyone who seeks asylum protection and that telling them to come back later is illegal. But CBP uses the same defense Nielsen used.

Regardless of whether officials are calling it "turning them away" or "telling them to come back later," some families aren't being allowed to apply for asylum at ports of entry, and crossing the border elsewhere could mean detention, prosecution and even separation from their kids.