Trump Admin. Says Rise In Family Separations Is On Congress. It's Not. 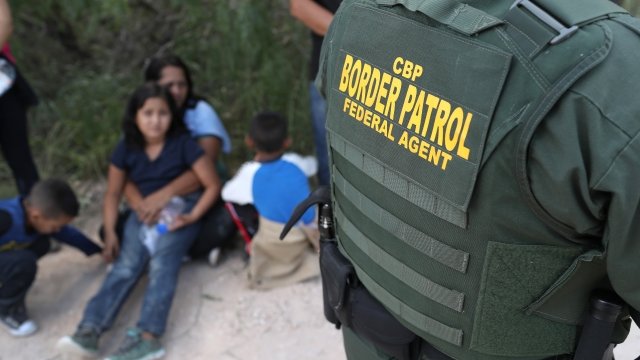 The Trump administration is abdicating responsibility for its own policy to Congress.

"Congress and the courts created this law, and Congress alone can fix it," Nielsen said.

Her comments came in a last-minute add-in to the daily White House press briefing amid growing backlash over the practice.

Back in April, the Trump administration announced it would start cracking down, prosecuting adults who cross the border illegally as criminals instead of slapping them with a civil violation. When a parent goes for criminal prosecution, they're separated from their kids. Nielsen says that's the result of legal "loopholes."

3 Governors Refuse To Send Troops To Border Amid Family Separations

New York is just one state holding back National Guard troops from the border in protest of the practice of separating migrant families.

White House press secretary Sarah Sanders backed up Nielsen's explanation. The White House says the law to prosecute people trying to cross the border illegally exists, and it's up to the executive branch to enforce it. It says family separation is a result of the so-called "loophole" Nielsen described — and that it can't hold families together while an adult undergoes criminal prosecution.

But here's the thing: The Trump administration is behind the spike in separations. Its "zero-tolerance" policy dramatically increased the rate at which families are split up at the border. And back in May, President Donald Trump reportedly lashed out at Nielsen in a meeting, demanding she tighten enforcement.

But Nielsen rejected the idea that separating families is a new practice under Trump.

Previous administrations, though, made some exceptions, and families crossing the border illegally were largely either detained together or released.