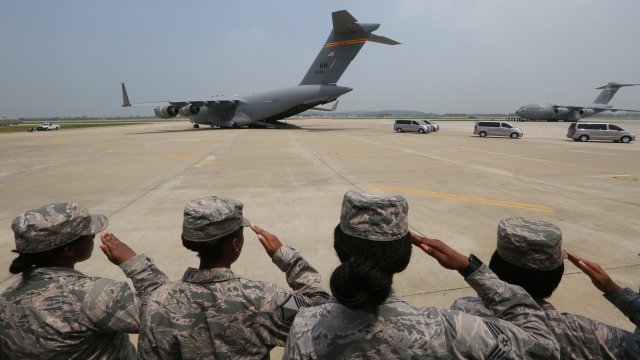 The transfer coincided with the 65th anniversary of an armistice that ended the Korean War.

North Korea's returned what are believed to be the remains of dozens of U.S. service members who fought in the Korean War.

Fifty-five boxes of remains arrived at a U.S. military base in South Korea Friday morning local time. The transfer coincided with the 65th anniversary of an armistice that ended the fighting.

President Donald Trump and North Korean leader Kim Jong-un agreed back in June to recover the remains of prisoners of war and those missing in action from the Korean War.

According to data from the Department of Defense released before Friday's transfer, about 7,700 U.S. military personnel are still unaccounted for from the conflict. Of those, the remains of an estimated 5,300 Americans are still believed to be in North Korea.

White House press secretary Sarah Sanders said in a statement Thursday, "The United States owes a profound debt of gratitude to those American service members who gave their lives in service to their country and we are working diligently to bring them home."

The United Nations Command is scheduled to hold a repatriation ceremony Wednesday. After that, the remains will be flown to a military lab in Hawaii where a DNA verification process will be conducted.