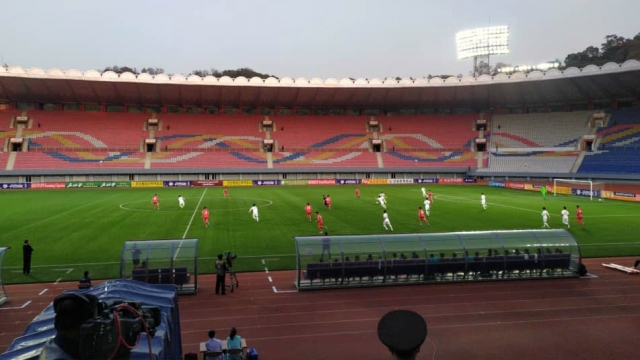 It's the first time the two countries have faced off for a men's soccer match on a North Korean field in almost three decades.

The governments of North and South Korea don't currently have the warmest relationship. But that didn't stop their respective soccer teams from playing against each other Tuesday.

It's the first time the two countries have faced off for a men's soccer game on a North Korean field in almost three decades. But almost no one was there to witness the historic event, since Pyongyang didn't allow South Korean fans and foreign media into the game. There was also no live broadcast of the match.

Tuesday's World Cup qualifier match ended in a 0-0 draw. The last time the two teams played each other was back in 2017 in Japan. South Korea won that match.

Tensions between North and South Korea rose substantially this year after Seoul agreed to conduct joint military drills with the U.S. North Korea's long cited the exercises as a reason it needs to have a nuclear arsenal and it rejected holding more peace talks with Seoul because of it.

But the neighboring countries have a record of trying to use sports to engage in diplomacy. The Koreas marched together under one flag at the 2018 Winter Olympics. They've also fielded combined Korean teams at the Asian Games in Indonesia and plan to launch a joint bid to host the 2032 Summer Olympics.