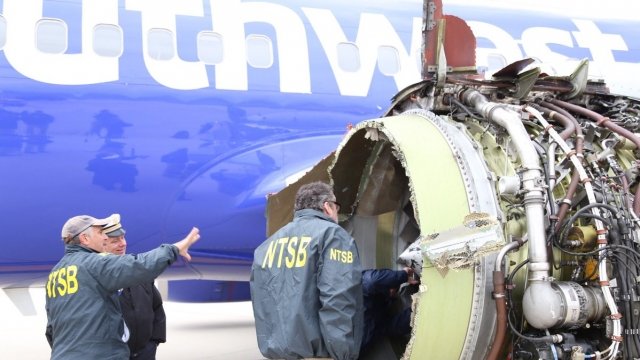 Part of a Southwest Airlines jet came down 70 miles from where the rest of the plane landed after an engine blew Tuesday.

Investigators say they found a piece of the Southwest Airlines plane that had an engine blow Tuesday 70 miles outside Philadelphia. The National Transportation Safety Board says it found one of the plane's engine cowlings in Bernville, Pennsylvania. That's right near where the pilots first noticed a problem.

The NTSB said there was evidence on the plane's engine of metal fatigue where a fan blade separated from the jet.

One of the pilots initially told air traffic controllers there was a fire in the engine before later clarifying.

"Southwest 1380 has an engine fire — descending," one of the pilots said. Later, she told ATC, "No fire now, but we are single engine."

One of the pilots was getting praise from passengers Tuesday night for how she handled the emergency landing.

When the engine failed, debris hit a window on the jet, breaking it. The woman sitting next to it was pulled partially out of the plane, according to other passengers. She later died.

The airline said Tuesday it was cooperating with the NTSB's investigation.