Obama Likes James 'Flacco' And Thinks Sony 'Made A Mistake' 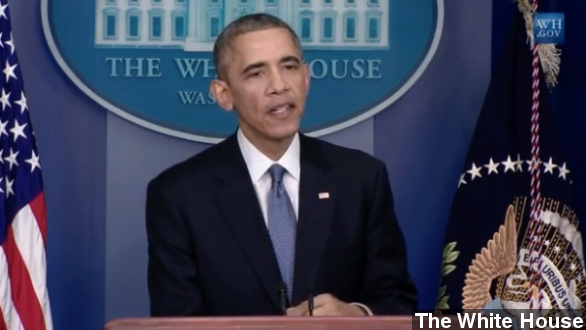 In his year-end address, President Obama said he didn't agree with Sony Pictures Entertainment's decision to pull "The Interview."

President Obama gave his year-end address Friday and said he didn't agree with Sony Pictures' decision to pull its movie "The Interview."

"I think they made a mistake. ... We cannot have a society in which some dictator someplace can start imposing censorship here in the United States. If somebody is able to intimidate folks out of releasing a satirical movie, imagine what they start doing when they see a documentary they don't like or news reports they don't like?"

Earlier Friday the FBI said North Korea was to blame for the Sony hack carried out by the group known as Guardians of Peace.

The Sony hack is unprecedented, and Obama's words Friday gave insight into just how much Sony has been coordinating with the U.S. government in handling the hack and threats.

"I'm sympathetic that Sony as a private company was worried about liabilities. I wish they'd spoken to me first. I would've told them, 'Do not get into a pattern in which you're intimidated.'"

The president wouldn't get into specifics on what the U.S. government's response to the hack will be from here on out — he kept things light and actually got one specific wrong.

"They decided to have the state mount an all-out assault on a movie studio because of a movie starring Seth Rogen and James Flacco. I love Seth. I love James."

"But the notion that that was a threat to them, I think, gives you some sense of the kind of regime we're talking about here. They caused a lot of damage, and we will respond."

The president did say the international community needs to set "clear rules of the road" for the Internet.