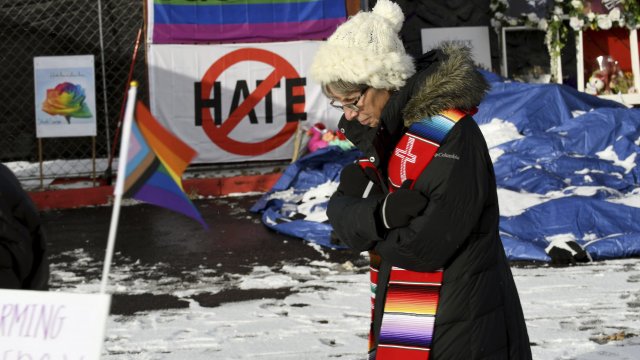 Law enforcement officials confiscated two firearms — a ghost gun pistol, and a MM-15 5.56mm rifle — from Anderson Aldrich, the accused shooter in the deadly November mass shooting at Club Q in Colorado Springs, during a separate criminal kidnapping and menacing case filed against Aldrich in 2021.

“It’s important to note that both weapons are still in the custody of the sheriff’s office today.  In fact, after the Club Q shooting, I was able to look at those items because they remain in evidence and were never turned back over to the defendant,” said Michael Allen, the District Attorney for Colorado’s 4th judicial district.

In June 2021, Aldrich had been accused of threatening his relatives with a bomb and other weapons, causing El Paso County law enforcement officials to evacuate parts of a neighborhood.

A Newsy investigation found no one petitioned for an Extreme Risk Protection Order, a civil process that could have removed Aldrich’s guns up to a year, but the district attorney said sheriff’s deputies were able to remove the guns anyway through a criminal mandatory protection order because Aldrich was charged with a series of felonies.

Groups like GLAAD and Equality Texas say there's a connection between the rise in anti-LGBTQ legislation and a rise in violence against the community.

“The lawful transfer of firearms was absolutely prohibited for the entire time that felony case was pending,” said Allen.

The criminal case against him, case 21CR3485, was pending for 383 days, said Allen, pointing out that the time frame was longer than an Extreme Risk Protection Order, which may remove someone’s guns for a year.

“The existence of 21CR3485 or even an Extreme Risk Protection Order would not have prevented the Club Q shooting,” said Allen.

The witnesses in the 2021 incident were Aldrich’s grandparents and mother, and they later became uncooperative, according to Allen.

No one could successfully subpoena them in time for the prosecution to meet the legal demands of a speedy trial after Aldrich entered a not guilty plea.

As a result, the court dismissed and sealed the criminal case against Aldrich in August. This prevented the public from finding any public records about the case, and the District Attorney was not allowed, legally, to acknowledge the case existed.

“The office absolutely prosecuted it. We prosecuted it until we couldn’t prosecute it any longer, and it would not have prevented the Club Q shooting,” said Allen.

Details of the case remained sealed until Thursday when Hon. Robin Chittum ruled that the public’s interest outweighs the defendant’s privacy rights.

She said this is the exact kind of case for which the provision that enables the unsealing of records was established. “Something huge comes out of the woodwork and demand scrutiny from the public,” she said.