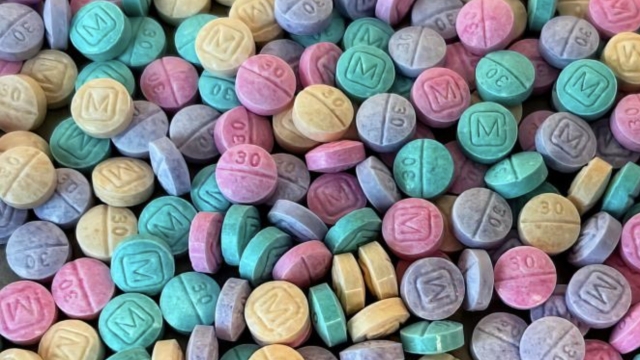 The colorful drug comes in various shapes and sizes including pills, powder and blocks that resemble sidewalk chalk.

U.S. Customs and Border Protection data shows more than 10,000 pounds of fentanyl has been seized along the southwest border this year alone. Officials believe this year may surpass last fiscal year — and unlike in the past, officers say some fentanyl trying to get past border checkpoints looks like Skittles or SweeTarts.

Just 2 milligrams of fentanyl — roughly 10 to 15 grains of table salt — is enough to kill.

An overdose shook Shaunna Jacobs awake from her addiction to prescription pills — heroin and fentanyl.

Though social media platforms like Snapchat have safeguards in place, drug sellers often change their tactics quickly, making them hard to detect.

"I was all alone, everyone was asleep and I woke up all by myself and it really scared me," she said.

Now four years clean, she's worried about "rainbow fentanyl," a trend on the rise that warranted a warning from the Drug Enforcement Agency.

The DEA and law enforcement officers reported seizing the brightly colored fentanyl in at least 21 states.

"We consider it a deliberate effort by the traffickers to drive addiction amongst young kids and adults," DEA Special Agent Orville Greene said.

Greene says he seized the first batch of rainbow fentanyl in mid-August.

He worries the dangerous drug will land in the wrong hands.

"A younger child that doesn't know, that sees it on the nightstand of a parent or a brother or sister — it's very concerning," Humphries said. "They may think it's candy. "

Customs and Border Protection officers' K-9s and X-ray machines help track down the deadly drug at the southern border.

Teen drug use hasn’t gone up. Instead, the drug supply has gotten dangerously toxic.

Officers have found rainbow fentanyl on people, in various parts of vehicles, even in the air intake of a motorcycle.

Officials say their biggest seizure at the Nogales Port of Entry was 47,000 rainbow fentanyl pills.

The colorful drug comes in various shapes and sizes including pills, powder and blocks that resemble sidewalk chalk — the product of the Sinaloa and Jalisco drug cartels.

In 2021, more than 100,000 Americans died of drug overdoses. Sixty-six percent of those deaths were related to synthetic opioids like fentanyl, according to the Centers for Disease Control and Prevention.

"I share my story in hopes that people wouldn't have to go through what I did," Jacobs said.

It's a life-altering lesson to potentially help save countless lives.