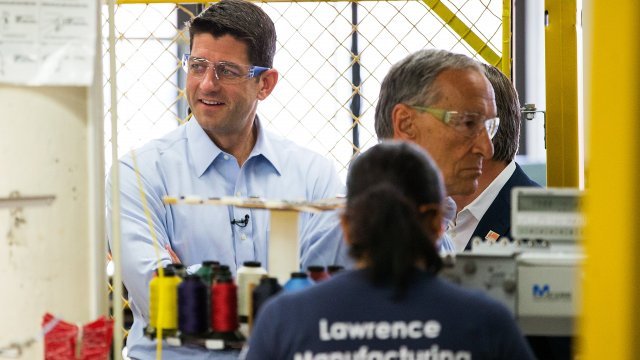 Paul Ryan says Republicans are united on tax reform and will rewrite the tax code this year.

Despite the collapse of the Republican health care bills, House Speaker Paul Ryan is confident Republicans can conquer tax reform.

The GOP's been united on its desire to repeal and replace Obamacare but has faced severe differences on the best way to do so. Ryan's convinced taxes will be different because "Republicans are sort of wired the same way, our DNA is very, very similar."

During his visit to a New Balance factory Thursday, Ryan said he wants to bring the corporate tax rate down from the current rate of 35 to 45 percent, pointing out that businesses face much lower taxes throughout the rest of the world.

Ryan told CNBC that a 20 percent tax rate would be "very realistic" but didn't go into specifics because the plan is still being worked on in committee.

Despite Ryan's optimism, Republicans don't agree on everything about tax reform.

One particularly controversial proposal Ryan has pressed for is a border adjustment tax. It would tax imports in an effort to bolster domestic manufacturing.

Hard-line conservatives oppose the plan and recently attempted to preemptively block it during negotiations about the budget.