Spain Could Issue An Arrest Warrant For Ousted Catalan Leader 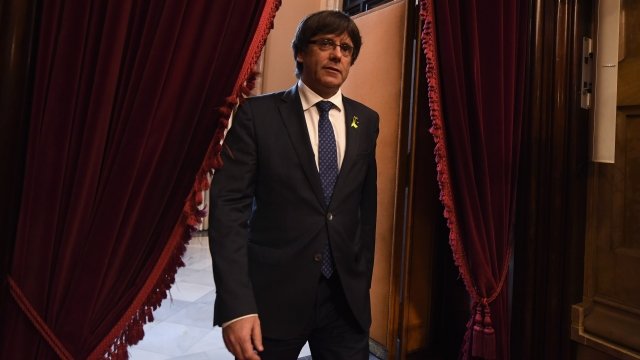 Carles Puigdemont was supposed to testify in court about his role in Catalonia's parliament declaring independence in late October.

Ousted Catalan leader Carles Puigdemont failed to show up to Spain's high court Thursday. He was scheduled to testify about his role in the region's parliament declaring independence in late October.

Puigdemont fled to Belgium on Monday. That same day, Spain's attorney general said Puigdemont and other senior government officials were accused of rebellion, sedition and embezzlement.

Those 13 other officials were also scheduled to appear in court Thursday — nine did.

Puigdemont said he went to Belgium to garner support from the European Union — not because he's seeking political asylum.

This constitutional crisis began when Catalan officials held an independence referendum last month, despite the Spanish government saying it was illegal. Ninety percent of voters were in favor of separating from Spain. Voter turnout was almost 43 percent.

In response to Catalonia declaring independence weeks later, Spain's Prime Minister Mariano Rajoy stripped the region of its autonomy and unseated its legislators. On Tuesday, the Spanish government said Catalonia will have a regional election in December.

Because Puigdemont didn't show up for questioning, the court might issue a European warrant for his arrest.