Pandemic Fatigue Could Cause Problems For Public Health 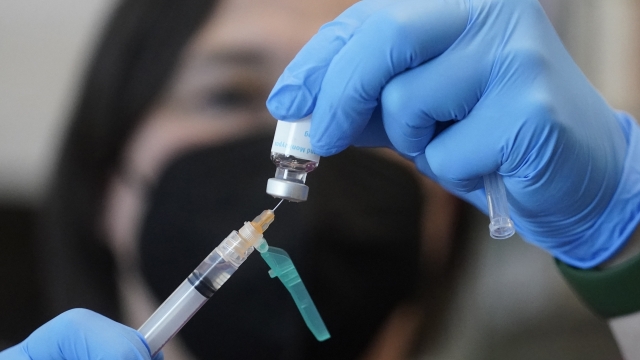 As most people get tired of dealing with the pandemic, experts worry Congress will too, which could affect vaccines, tests and other policies.

It's been a long pandemic, and COVID still isn't fully gone. Now, monkeypox and polio have entered the conversation.

Many are still trying to figure out what a degree of normalcy looks like, but as tired as people are, how much worse is it for the actual public health system?

It's led to a whole array of challenges for public health, and that could have major consequences for an already weary U.S. health system.

While public health got a boost in funding during the heights of the pandemic, the Biden administration is already pulling back on funding for tests and vaccines because of a lack of funding from Congress.

It worries experts like Thoai Ngo, an epidemiologist working at the health justice research nonprofit the Population Council.

"My main worry right now is that because of how we operate, we will erode trust from people in public health institutions," Ngo said. "We will make it harder for us to control and manage the current epidemics: COVID-19, monkeypox, polio and future epidemics."

So, what does the U.S. public health picture look like with COVID now?

The CDC Is Restructuring Its Agency Amid Public Criticism

The CDC is now changing how it releases information to the public due to recent criticism from Americans.

Federal officials in places like the White House and CDC celebrate the role vaccines have played in preventing severe disease and death. The numbers show they definitely have, with COVID deaths in the last few months largely staying at a low point that we only saw briefly last spring and summer.

The CDC has used this as the basis for its new guidance from mid-August, which do away with the recommendations to practice social distancing and to quarantine if exposed to COVID.

It's that reduction in severe disease and death that has underpinned the rollback of universal mask mandates nationwide and vaccine mandates in many places.

Dr. Shira Doron, a hospital epidemiologist at Tufts Medical Center, has helped advise officials in Massachusetts on COVID policies, including in schools. She welcomes some of the new policies that roll back restrictions now that ways to prevent severe outcomes are readily available.

"The fact that we have all of those layers now — vaccines, tests and treatments — just puts us in a completely different place in terms of that risk of severe disease, which is what we care about, which is the only thing we can hear about because we just can't prevent infection," Dr. Doron said. "That infection is too contagious."

For those who center their work on immunocompromised people, policies rooted in fatigue with the virus look like an admission that the virus has won.

"I just think that, particularly with the recent CDC guideline, it's confirming to me that the Biden administration and our federal health officials have given up on controlling infections of COVID-19, and they left the vulnerable, the elderly, the immunocompromised, people with disability, in the cold," Ngo said.

Then there's long COVID, which is more than just a few extra weeks of the sniffles.

It's personal for Elizabeth Jacobs. She's an epidemiologist at the University of Arizona who has two illnesses that suppress her immune system.

"We're seeing things like fatigue," Jacobs said. "That is really hard to describe. I think that a lot of people use fatigue in the colloquial sense of, 'I'm just tired.' But for somebody like me who has genuine fatigue caused by autoimmune diseases, it's not like that. It's more like you have cement blocks tied to your legs and arms, and you just can't really even move around a lot. You have trouble getting out of bed and even sitting up in front of a computer is really difficult."

Beyond her concern about her own risk if she contracts COVID, Jacobs worries that a shift away from preventing infection could make it harder to solve other problems tied to it.

"Is it that people are tired of mitigation with masking, or is it that we are tired of things like flight cancellations and supply chain issues and having our children out sick from school and needing to care for our loved ones and seeing our neighbors die?" Jacobs asked. "Because if it's the latter that is causing fatigue in us, then that is not being caused by mitigation. It's being caused by the lack of mitigations."

In short, public health officials at federal and local levels have said they believe the response started slower than it should have. Tests and vaccines have also been hard to come by, although there's hope that new shipments in the coming months should make it easier to vaccinate people at risk.

It sounds similar to some of the early missteps in addressing COVID-19, and that might not be a coincidence.

"The response to monkeypox, from what I can tell, is very much influenced by the law over the last two years of COVID, right?" said Jared Auclair, director of the biopharmaceutical analysis and training lab at Northeastern University. "People just don't want to think about it and just don't want to deal with it. Taking that mindset of slow rolling into a response because you are exhausted from COVID and don't want to, you don't want to have any repercussions like you're being alarmist."

The good news about vaccine demand outstripping supply is that there's a high degree of interest from at-risk groups. Monkeypox is primarily affecting gay and bisexual men who have sex with men.

"In general, that community has been very direct and forthcoming about wanting to take steps to protect itself and others," said Jen Kates, director of the global health and HIV policy Program at the Kaiser Family Foundation.

While those affected by monkeypox aren't putting aside getting their shots, pandemic fatigue is having a knock-on effect for other outbreaks.

"What has happened though is because of this pushback on the public health authorities putting in place requirements or guidance, there's been an increasing move, as we've seen across the country, to attack, to sort of apply this to other public health interventions," Kates said. "Well, we don't want our children to be forced to have immunizations for schools, things like that, which is frankly very dangerous."

So polio, diphtheria and all those other diseases many get vaccinated against without thinking about as a kid — if pandemic fatigue continues to translate to underfunding public health, all of those could also come back.

"The worst case scenario of that is that we get used to having those old diseases come back, that we have children dying of diphtheria, we have communities impacted by polio and ... with limited resources," said Amanda McClelland, senior vice president of the Prevent Epidemics Team at Resolve to Save Lives.

Even going back to COVID, the message from public health experts about how to keep things from getting much worse is to invest in the tools we need to keep risk low.

"I am not terribly concerned about pandemic fatigue when experienced by somebody with a fair amount of immunity, but I am concerned about Congress having pandemic fatigue," Dr. Doron said. "I think that it is still really important that the government be focused on COVID-19, even though I don't think every individual needs to be so focused on COVID-19 anymore because we can be pretty safe if the government continues to fund the things that are keeping us safe."