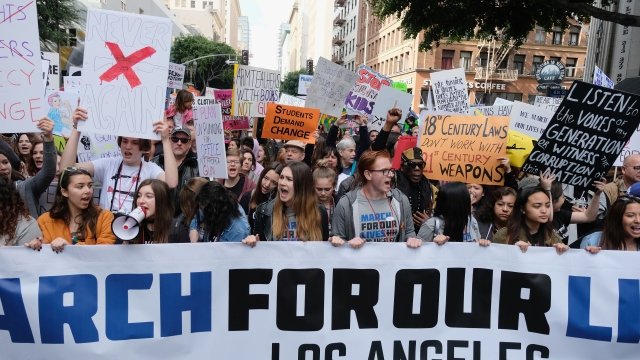 Some young voters have demanded action on gun control, but it's a voting bloc that's notorious for not showing up on Election Day.

Young voters are notoriously absent at midterms, but experts say this year could be different, in part because of the political activism surrounding guns.

A July analysis from polling firm TargetSmart looked at the change in millennial voter registration before and after the shooting at Marjory Stoneman Douglas High School in Parkland, Florida. They found that since then, youth voter registration has increased nationwide by 2.1 percent.

"We saw the response to the tragedy in Parkland was this sort of unprecedented surge in activism, where you saw these Parkland students who really began the movement and brought in students from around the country where, they had the March for Our Lives. ... And a lot of that movement was talking about turning that into political power," said Tom Bonier, CEO of TargetSmart.

Some of the biggest jumps in youth voter registration happened in key battleground states like Pennsylvania, with a 16 point increase; Virginia, with a 10 point jump; and Florida with 8 percent.

And so far, young voters have been more engaged in the 2018 elections than previous midterms. A September analysis from TargetSmart found youth voter turnout in the 2018 primaries increased by an average of 4 percent nationwide compared to the 2014 primary elections.

Will Millennials Vote To Fix Problems They Blame On Baby Boomers?

Millennials are blaming baby boomers for making their lives harder, but their voter turnout is expected to fall this year. Why is that?

"I think there’s a lot of reasons to be optimistic about youth turnout," Bonier said. "And when you have these wave elections … the hallmark of those types of elections are a lot of close races. So even if we're talking about a one- or two-point change in the composition of the electorate, when you’re talking about a group that votes overwhelmingly Democratic as young voters do, you're talking about potentially dozens of races that could flip just on that small level of change."

At An NRA Protest, We Ask: Is There A Middle Ground On Guns?

People on both sides of the gun debate stood outside of the NRA headquarters in Virginia chanting, protesting and debating the issue.

"If a politician was talking about guns, it was generally a Republican using it to attack their Democratic opponent. And you are seeing Democratic candidates talking about common sense gun reform now, which is something that's certainly new when you see how widespread it is and something that probably wouldn't be possible if we weren't seeing this increased engagement from younger people," Bonier said.

But pollsters are cautiously optimistic. Young voters are famous for not showing up on Election Day.

"So if you look at the numbers, there was a small spike, especially after Parkland," said Marissa McBride, executive director of the Voter Participation Center. "I think part of that was the mobilization around Parkland was not only about gun safety, but it was really owning the fact that you could make a difference by using your vote, so you saw registration rates start to peak a little bit. But they're dwindling."

The Voter Participation Center, a nonpartisan research group dedicated to increasing the participation of minority groups in elections, estimates more than half of millennials who voted in 2016 will not vote in 2018.

But things could be different this November. A September report from the Pew Research Center shows that voter enthusiasm is at a record high for a midterm election year.

"This is a midterm unlike any other. I think people are actually really, really reeling from the consequences of 2016 and understanding that by not voting, that has changed their lives," McBride said.