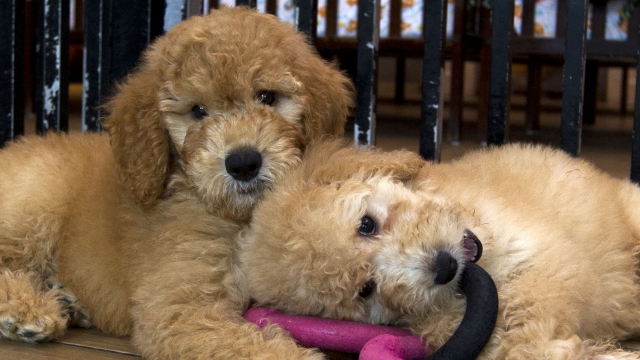 Legislators say banning pet stores from selling some animals will prevent inhumane breeding, but pet store owners say it will highlight other issues.

For some people, puppies mean one thing: joy.

"When you deal with puppies, it's just constant happiness, so to not have that or to think of that going away, it's scary. It's just depressing also," said Nassar Ahmed, owner of Vanity Puppies.

For Ahmed and his wife, proud owners of six dogs and a pet store in Queens, New York, that happiness is in jeopardy.

Ahmed says about 50% of their profits come from selling puppies. But soon, New York City stores like his will be banned from selling dogs, cats and rabbits.

"You're basically going to be cutting a lot of jobs for most of these pet stores," Ahmed said. "It's pretty depressing."

Jennie Lintz, the director of puppy mill initiatives for the American Society for the Prevention of Cruelty to Animals, says puppy mills breed as many animals as possible and keep them in small spaces, often abusing them to maximize profits at a faster pace.

"The facilities that house these dogs have very many dogs, usually hundreds of dogs," Lintz said. "The dog lives in a cage its entire life. They go to the bathroom in the cage. They eat in the cage. They generally don't have access to exercise. There's no preventative vet care."

Lintz says New York's legislation will help stop the pipeline of animals sold to consumers for thousands of dollars — animals that often also come with expensive and unforeseen vet bills.

England Will Ban Pet Stores From Selling Puppies And Kittens

A new regulation will ban third parties from selling puppies and kittens under six months old.

"A consumer in a pet store is only seeing the puppy," Lintz said. "They don't have the benefit of seeing the facility where they came from. They don't get to see where the mother of the dog comes from. So they're just looking at this adorably cute puppy and really don't have the ability to make any kind of an informed decision."

The ASPCA found 43% of the puppies shipped to New York pet stores arrive by truck from Missouri. The state is home to nearly 750 commercial dog breeders, the largest number of any state in the nation.

In late 2021, the ASPCA assisted with the rescue of more than 500 dogs from a U.S. Department of Agriculture-licensed commercial dog breeding facility in Iowa. Some of the animals were dead, and others were seriously malnourished.

The legislation aims to prevent situations like that, but some argue it unfairly targets pet store owners that are doing things right.

To make sure his shop buys responsibly, Ahmed says he and his wife visit the breeders to inspect the facilities.

"We actually meet the family," Ahmed said. "If they're able to allow us to just explore the area around, we feel a lot more comfortable. There has been instances where we go there, and they're like, 'No, this is off limits.' There's off limits, and you can hear dogs in the background. So if you see things like that, you know that they're already hiding something from you."

Ahmed argues further regulations would be more effective rather than a law that he says would inevitably put them out of business.

"You can add on a lot more inspections on our end and also the end of the breeder," Ahmed said. "It's really easy to just go in there, inspect them a few times a year and see if there's anything going on because these are unannounced inspections."

According to inspection reports by New York state, 70% of pet retailers have been cited for violations in the past five years for things from lack of veterinary care for sick animals to failure to vaccinate the pets.

New York state Assemblywoman Linda Rosenthal, a Democrat who sponsored the legislation, says the puppy pipeline is a business model based on cruelty. She also says New York state does not have the capacity nor should it be keeping track of where animals are sourced.

"We're sending a signal out that New York state will not be complicit in cruelty," she said. "All of a sudden, people come up with a brand new system. That's not the way to do it. This is the way to save consumers heartache and money. Animals will not be abused here in New York state. And the fact is that if there's less demand, there will be less supply, and that ultimately attacks the puppy mill issue at its heart."

New Yorkers would still be allowed to buy animals directly from breeders; they would just need to find a shop out of state — a move to allow prospective pet owners to visit and buy from responsible breeders.

Ahmed says that instead of stopping the problem, the ban could instead push sales to the internet.

"It's going to lead to a black market at some point once we go away," Ahmed said. "We're in 2023; right now is the age of the internet. You can sell anything you want from any country to any other world, any other part of the world."

The law is also meant to motivate people to adopt animals, but pet store owners claim many people turn to them because they didn't meet the shelters' requirements.

"Especially in New York, you have to have a certain amount of square footage, and you understand that we're in a city that rarely has square footage," Ahmed said. "If you have a certain amount of a head to bedroom ratio, that's not enough for them. You don't qualify. So it seems like even though they say, 'Hey, let's adopt out every single dog,' they have a million and one reasons to deny every single applicant."

Ahmed and his wife are now finding it hard to think about the future. They made an investment on a place they were already familiar with, and they got five of their dogs from the same business they now call their own.

"We love this place, and the opportunity to take over this place or to run as a business was something we don't want to turn away from," Ahmed said. "We came into this industry because we wanted to make sure that all the puppies are taken care of, not just to make money off of these puppies," Ahmed said.

New York is now the sixth state to pass a ban on pet sales in stores, following California, Illinois, Maine, Maryland and Washington. The law will take effect in Dec. 2024.

Could dogs be the key to curing childhood cancer?

Through funding from President Joe Biden's Cancer Moonshot initiative, experts are learning how dogs are offering a unique way of looking at cancer.